Beth Blissman Offers Her First Update from Loretto at the UN 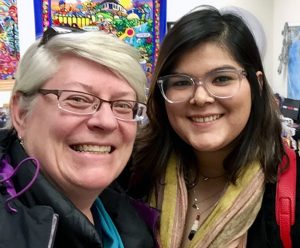 Since the early 1990s, Loretto has had a presence at the United Nations. In official language, we are a non-governmental organization (NGO) with consultative status at the United Nations. Building on the work of Pat Kenoyer, Nancy Finneran, Betty Obal, Mary Peter Bruce and Sally Dunne, I’m deeply honored to bring Loretto values (as well as voices of youth and marginalized communities) into the global decision-making process at the United Nations. We work in collaboration with other NGOs and members of civil society and with U.N. member states and agencies to advocate for the rights of girls and women and a social justice-oriented framework for creating international policy.

I’ve been on site since early January and have enjoyed finding my way around New York City. Current Loretto Volunteer Ariana Alvarez and Rosa Lizarde of the Feminist Task Force have been essential to my success thus far. There are more acronyms here than any institution of higher education I’ve ever seen! Even with all the acronyms, however, I’m grateful to bring my previous experience as a Catholic campus minister, grassroots environmental justice activist and university faculty person/administrator to this new setting. I’ve been a Loretto Community co-member since 1995 and have served on the Loretto Earth Network Coordinating Committee since 2000.

In February, Ariana and Erica Carlino, a co-member in process, and I represented Loretto at the Commission on Social Development, a 10-day annual event focused on supporting research, policy and structures that eradicate poverty.

Our biggest event is the annual Commission on the Status of Women, which took place March 13-24. Loretto hosted the largest delegation of Loretto students and faculty members ever.

Students from Loretto high schools in St. Louis, Denver and El Paso joined this global discussion to advance the rights of women and girls, to raise their own voices and listen to those of women and girls around the world. For the second year in a row, we welcomed Loretto Volunteers from both St. Louis and Washington, D.C. Especially in this time of increasing division and political discord, we value the opportunity to model critical thinking and civil discourse in an international setting.

Please keep us in your thoughts and prayers as we undertake this important ministry.