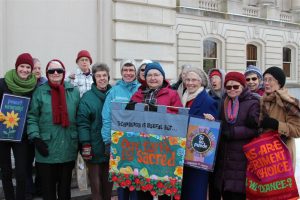 Loretto members gathered at the Ky. Capitol building on I Love Mountains Day.

Loretto rallied among the hundreds of Earth-loving Kentuckians and friends that mobilized on February 12th for the ninth annual “I Love Mountains Day.” It was a chilly afternoon in Frankfort, Kentucky but the sun shone bright as multiple generations of activists from across Appalachia marched from the Kentucky River to the Capitol building to protest mountaintop removal mining. Organized by Kentuckians for the Commonwealth (KFTC), the inspiration behind this year’s demonstration was not only to end to mountaintop removal mining and pollution, but also to collectively envision a future for Kentucky that respects democracy and prioritizes the long-term health of people and the planet.

Among the speakers at the rally was Teri Blanton, of KFTC, who is rooted in Kentucky and has been fighting to end mountaintop removal for the past 20 years. As this mining practice continues to pollute our communities’ water sources with harmful toxins, Blanton spoke to the radical changes that must take place to protect land and families. She called on the crowd to “create a new energy revolution in this state, a new power revolution.” The impacts are far reaching, she continued, “we need to address the legacy of pollution, over 100 years of mining and the messes left behind.” Blanton is an advocate of the Stream Saver Bill – which would prohibit mining near streams – a step toward protecting the destructive impacts and health consequences of mountaintop removal. 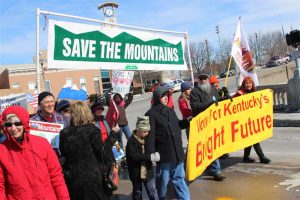 Demonstrators marched from the Kentucky River to the Capitol.

Eleven-year-old Chase Gladson of Harlan County spoke passionately about his love for the Kentucky mountains where he is growing up and hopes to someday raise his own family. Chase said that he worries about the future of his home state as he sees things “falling apart.” With this consciousness and a call for clean water and jobs Chase stated, “I know that for me to stay close to home, things will have to change…I’m only 11 years old, but I believe all this is possible…it will take all of us, I mean all of us, working together.”

As KFTC chairperson Suzanne Tallichet pointed out at the rally, “Coal is on the decline, although the effect of mountaintop removal will still be with us.” Although the industry is changing, the discussion needs to continue; it needs to expand to challenge any extractive activity that negatively impacts local communities and threatens the sustainability of our Earth. This includes gas liquid pipelines like the Bluegrass Pipeline, which if developed, would funnel hazardous liquids through our own precious land in Kentucky.

Claire McGowan, of the Dominican Sisters of Peace, is part of the community-based movement actively fighting against proposed Bluegrass pipeline. McGowan urged lawmakers to consider the future, and more specifically to invest in alternative energy sources, “We don’t need to develop more fossil fuels at all. In fact, we can’t afford to develop more fossil fuels…the transition to renewable energy sources must begin now.”

The urgency of these issues cannot be ignored; nor can the visions and knowledge base of those local communities facing the consequences of mountaintop removal and fossil fuels. It is a complicated issue with many layers and histories entrenched in an industry fueled by coal, but by transitioning to sustainable energy economies we simultaneously transition toward justice. KCTC is sustained by community engagement such as this and is calling for a healthy democracy.

In solidarity with our fellow Kentuckians, landowners and environmental organizers, Loretto had the opportunity to sing at the rally. With The Dominican Sisters of Peace and Sisters of Charity of Nazareth, we sang reverence to the fullness of creation:

“For the beauty of the earth, for the splendor of the skies,
For the love which from our birth over and around us lies.
God of all, to you we raise this our hymn of grateful praise,
For the joy of human love, brother, sister, parent, child,
Friends on earth and friends above, for all gentle thoughts and mild.” 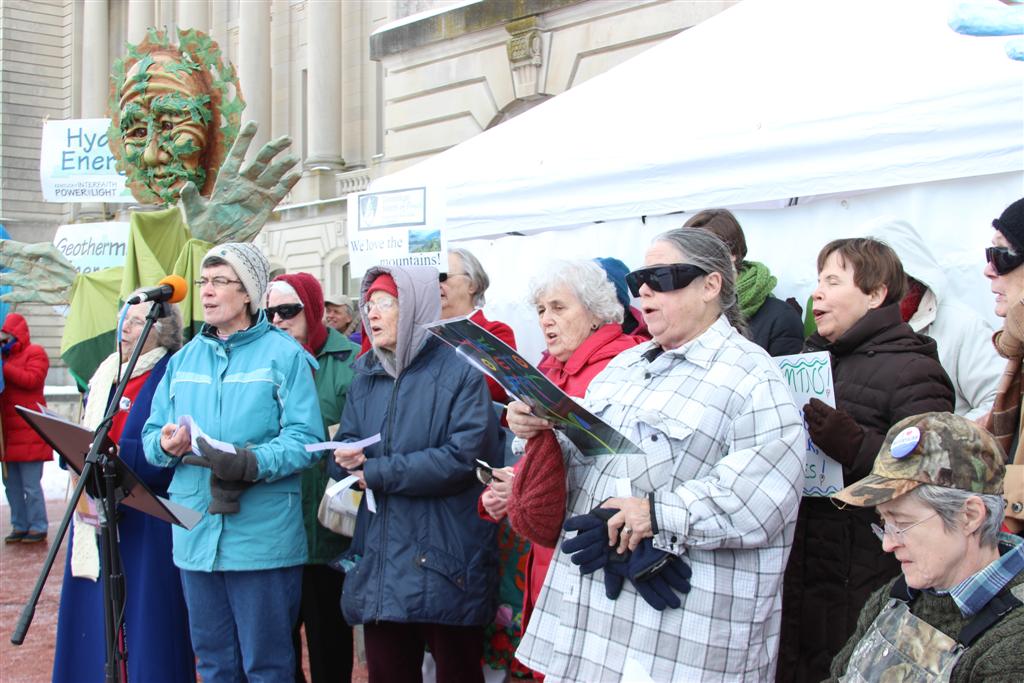