Mary Ann Lovett Returns to Loretto as a Co-member 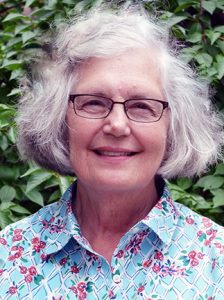 No one has taken the task of becoming a Loretto Co-member more seriously or intently than Mary Ann Lovett! Mary Ann DeBaggio Lovett first met the Sisters of Loretto at St. Ann’s Grade School in Arlington, Va., from which she graduated in 1959. In 1963 she enrolled as a freshman at Webster College in St. Louis, and Sept. 15, 1964, she entered the Loretto Novitiate in Kentucky. She remained in the Novitiate until late 1965. In January 1966 she returned to Webster to finish her college education, graduating in 1967. Following graduation she taught at the Indiana University Lab and began work on an MAT in science education. She taught in Nova Scotia for eight years where she met her husband Charles Lovett. They were married in 1978. Their first child, Danielle, was born that same year. Brianne followed in 1980, and young Charles came along in 1984.

The summer of 1984 the family moved to San Antonio, Texas, where their fourth child, Alicia, was born in 1986. Mary Ann and Charles began a business together in San Antonio, where she still resides. She had researched neurofeedback and became a practitioner after she and Charles divorced in 2009 and still meets with clients. She took a job as assistant business manager at her parish in San Antonio then later went to work with Texas Foster Care and Adoption Services as a case manager. She now works with autistic children and juvenile probationers.

Over the years, Mary Ann stayed in touch with some of her former teachers at Webster and off and on with me. In May 2012, Mary Ann contacted me to say that she was coming to Denver on business; I invited her to stay with me and, as they say, “the rest is history.” We re-connected and she expressed her strong desire to become a Loretto Co-member. She applied in June 2012 and participated in the 2012 Assembly in St. Louis. Mary Ann also attended the Co-membership Gathering later that September in Kentucky. Fall 2012, she attended her first Community Group meeting (Group 3) in Denver. She has continued to be an active participant with Community Group 3 and has volunteered to do many tasks, such as contacting every Loretto Community member in Denver to invite them to participate in the “LorettoPALOOZA” this past summer.

As Eileen Harrington remarked, “Mary Ann is the most conscientious Co-member (applicant)“ she has ever met! Mary Ann engaged her former classmates Barbara Mecker and Barbara Roche in a monthly Skype discussion of I Am The Way and joined the Latin American Caribbean Committee as a supporting member. While in Denver, she visited St. Mary’s Academy and the Bridge Community and spent a week with another classmate, Mary Margaret Murphy, in El Paso at Villa Maria.

I am delighted to have Mary Ann “back in the fold” and in the embrace of Loretto. She brings many gifts and will benefit greatly from the association and the support on her spiritual journey and in her pursuit of justice.