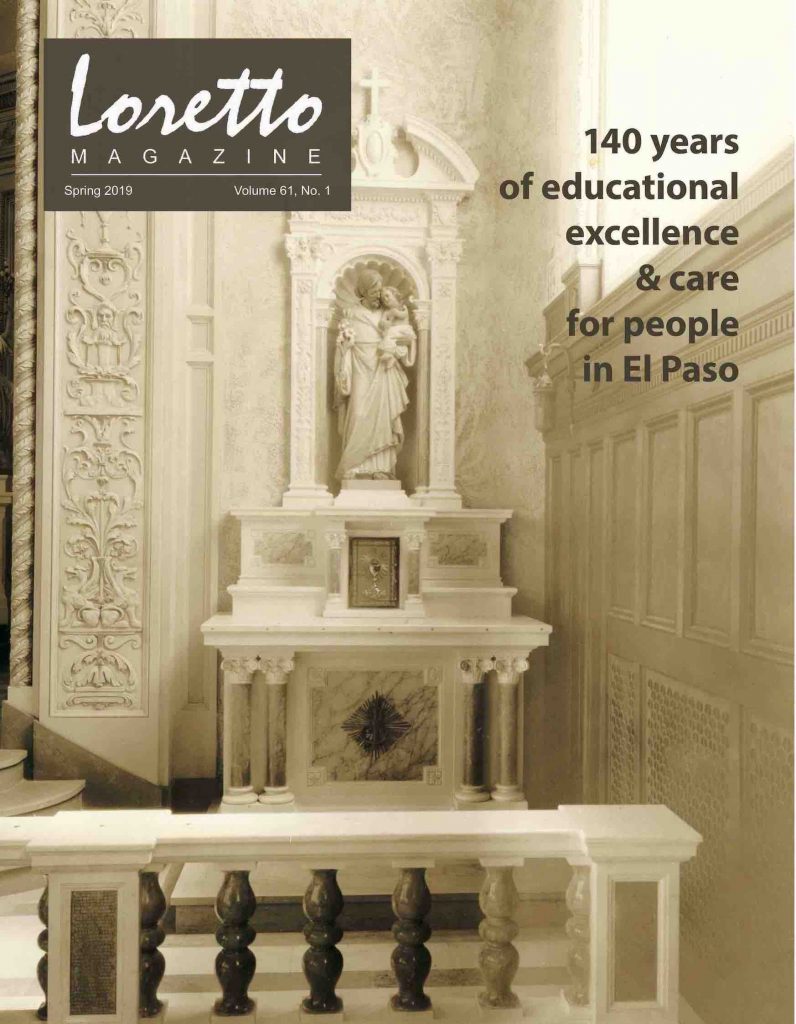 Mary Margaret Murphy SL, Loretto’s new Vice President, laughs as she recalls some of her Machebeuf High School friends talking about entering religious life. Back then, her retort was “Thank you, God. That’s not for me.” But she fondly recalls being deeply touched by the faith, spirit, joy and dedication of the sisters at Machebuef. That is what drew her to them and to their way of life. Now, 54 years later, her heart is filled with gratitude as a Sister of Loretto and humbled by her recent election to Vice President of the community. Her mantra is: “God-given talents are to be shared with others.”

The sisters arrived in Texas in 1879, moving south to San Elizario from New Mexico, where they had been teaching since 1852. They helped build a stone and adobe convent which housed their new school, St. Joseph’s Academy. A placita (small plaza) stood in the center, and all around the building, they planted flower and vegetable gardens and an orchard.

I came to Loretto Academy in 2000 for a one-year term as interim President, fully intending to return to Denver. However, that was not in God’s plan. I knew that the population of Loretto Academy was over 85% Hispanic and Mexican and there was not much economic diversity. It became my goal to increase the economic diversity of the young people Loretto Academy served. Thanks to Don and Janis McFall of the Challenge Foundation in Denver, the Miles Foundation and many other donors, 35% of our student body now receives $710,000 of financial aid. 10% of the student body receives 90% to 100% full scholarships.

In early October 2018, the number of asylum seekers coming into El Paso began increasing dramatically. Annunciation House needed more volunteers to assist with serving these people. Sisters from many religious communities began coming and needed housing. After the convent closed and rooms were converted to offices, there were still 14 rooms that were saved for small retreats, for Sisters of Loretto coming to El Paso, and a few Academy housing needs.

Five weeks at the shelter

Immigrants were assigned two families to a room at the La Quinta motel where Alicia Ramirez SL volunteered upon her arrival in El Paso last January. Two fathers and their children, for instance, would share a room. “One man,” she says, “when he walked in with his son, broke down crying when he saw how nice the room was.”