Posted on December 1, 2018, by Loretto Community 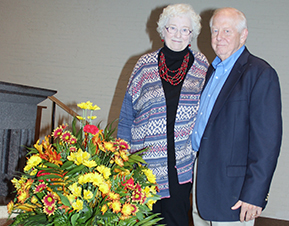 The dawning sun sent rays to color the stratus clouds in the wake of its coming. We walked out into a crisp 46-degree morning into a day that would contain a ceremony for a new co-member.

Karel Disponett was born in St. Louis, the only child of John and Ennerd Bresch. Karel wrote in her autobiography, “By the time I came along on March 15, 1947, life was populated on both sides of the family with steady working blue collar/lower middle class folks. The Irish Catholics gave up criminal activities and kept only the drinking and loud ‘debates.’ The other side stayed as ‘proper’ and as normal as they could pretend to be.

“When I was 9, I went to live with my maternal grandparents in Florida for a year and a half and spent all my summers with them throughout the rest of grade and high school. My grandmother was a major influence on my life. Her world view gave me ‘permission’ throughout my life to explore both spiritual and worldly roads, paths and alleys. 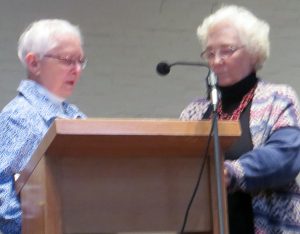 “Another major influence on my early life was attending Nerinx Hall High School. It was easy for me to identify with and feel at home with Loretto values, which became my values and have continued to be an ongoing part of my spirituality, daily life and decisions. I attended the University of Missouri-St. Louis with a major in sociology and a minor in Spanish. Then I received an assistantship in sociology at the University of Kentucky. After a year and a half in graduate school, I decided I didn’t want to spend the rest of my career in the stacks so I got a job as a rehabilitation counselor at the state mental hospital in Lexington. It was there I decided I enjoyed working with people on the margins of society and decided my vocational calling was to be present with people struggling in one way or another to live at peace with themselves and the world.

“The majority of my career years (30-plus) have been spent working in community mental health clinics in both administrative and direct services roles. In 2007 I obtained my Ph.D. at the University of Louisville in psychology. I currently work part time as a clinical supervisor for young therapists who are not yet fully licensed. In 1975, Ken and I were married in the Episcopal Church where we were very active for over 30 years. After the death of Ken’s former wife, he decided to join the Catholic Church, and I returned to it as well. My association with Loretto has existed for over 50 years.” 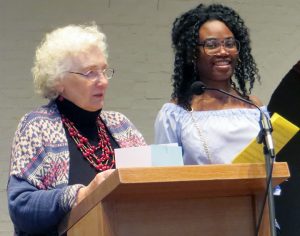 Along with her busy schedule, Karel finds time to visit with sisters in the Motherhouse Infirmary once a week. Some of her Nerinx Hall teachers are living here now: Billie Vandover, Valerie Novak, Nancy Wittwer and Kathleen Tighe. Karel’s co-membership ceremony took place in our church on Nov. 4. In her talk to the 60 Community members, friends and family who had gathered, she thanked her I Am the Way study group of Mary Peter Bruce, Kaye Edwards, Eleanor Craig, Leslee Moore and Nasreen Daniel, and the musicians Mary Swain, Jessie Rathburn and Francine Kapayo. Also high on her gratitude list was her contact person, Eleanor Craig, who guided and enlightened her very well through the co-membership process.

Karel ended her talk, “So after three years (of preparation) and much gratefulness, I will now make four basic commitments to the Loretto Community. I commit to standing with all of you and Mary at the foot of the Cross as we strive to improve the conditions of those suffering from injustice, oppression and deprivation of dignity. I commit to active participation in the life of the Community. I commit to go forth to meet our farthest neighbors in their human needs and aspirations and seek to reach out beyond boundaries imposed by any differences that tend to separate us. I commit to freely experiencing, expressing and sharing the gratitude, joy and growth that comes from the participation in the life of Loretto.”

After the church service, the joy of celebration was carried over to the dining room where we enjoyed a lovely tea party, complete with white table cloths, teapot centerpieces, delicious tea and cookies.