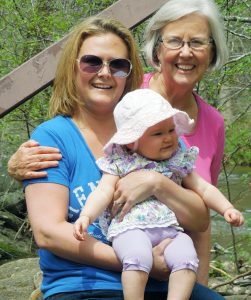 Just after her route from Lynchburg, Va., took her onto the Bluegrass Parkway near Lexington, Ky., Kaye Edwards breathed a deep, comfortable sigh, saying to herself, “I’m home.” She was on her way to the town of Loretto after she and husband, David, had retired following his 13 years of ministry in Lynchburg. “Home” connoted not only one’s space for retiring, but in Kaye’s case, one’s place of origin, for she was born and grew up in Paris, Ky., a small town in the northern part of the state.

Her initial connection to the Loretto Community occurred about 38 years ago, Kaye said, when as a student at Lexington Theological Seminary she made her first trip here. She then began bringing along friends and colleagues for retreats, many members of The Christian Church (Disciples of Christ), the denomination in which she is an ordained minister. Her co-membership dates from 1981.

Kaye’s entire professional life has been devoted to working with families, especially with children. “I’ve always been drawn to children,” she said, recalling how she helped with Vacation Bible Schools while she was still in high school. After college, her first job was as a play therapist at Boston Children’s Hospital. This position, nicknamed “play lady,” included working with children in arts and crafts and helping to develop their social skills.

From then on, Kaye’s career path has led through both secular and church-related stops where her talents have been concentrated on ministry to children. For example, she served as children’s advocate in a shelter for abused women, as the family life education coordinator for a family service organization and as a minister for Christian education and youth for a local church congregation. While in a wide variety of settings, her work has always focused on the well-being of the young.

Kaye’s volunteer activities have ranged from being an elementary classroom helper in language arts to assisting with the Special Olympics. A recent volunteer effort, still ongoing in Lynchburg, was her part in co-creating a small café there. She explained that it was “dedicated to providing a safe place for people of all ages, abilities, faiths and means to come together for conversation and community-building. A portion of the donations received for food and service goes to local groups that serve children and their families.”

Her time with children, especially her involvement with the ecumenical program, Children and Worship, beginning in 1996, has been very formative of Kaye’s own theology and personal spiritual life. This program, consisting of the simple narrating of Bible stories accompanied by the reverent placement of wooden sacred objects, has often elicited profound insights from the little ones, Kaye said, adding that they have served to deepen her own understanding of where God is. With a Special Needs grant to purchase the materials, she recently has begun to present this program at the Loretto Child Care Center.

Her expertise and dedication to ministry to children led Kaye to a position on the national staff of the Disciples of Christ denomination where she served for 16 years as director of family and children’s ministries. In this capacity, working out of the church’s national headquarters in Indianapolis, she traveled all over the United States and abroad to conduct training sessions and consultations with churches and non-profit organizations. Kaye retired from this post five years ago.

Since moving to Loretto, where she and David live just up the road from the Motherhouse, Kaye has become involved in several local Loretto projects. Currently she is one of the Motherhouse Community members serving on the local arrangements committee for this month’s Assembly. A year from now, she will be working for the 2018 Assembly for which she was recently appointed to the three-person committee to plan the election of co-members to the Community Forum. Kaye is also one of a small Motherhouse group that meets regularly with a co-member-in-process to discuss I Am the Way with her. Recently when David brought Loretto Head Start kids and some parents to the Motherhouse for a taste of farm life, Kaye, of course, was there as support. She is available to the staff of the Loretto Child Care Center when a substitute teacher is needed there.

The Christian Church (Disciples of Christ) was founded at the Cane Ridge Meeting House, just outside the town of Paris, Ky., Kaye’s birthplace. Coincidentally, the denomination had its beginnings at about the same time as the Sisters of Loretto had theirs. So Kaye’s return home to Kentucky touched more than one level.

For a profile of David Edwards, readers are referred to “Trouba-dour to Tots” in the April 2017 Interchange.