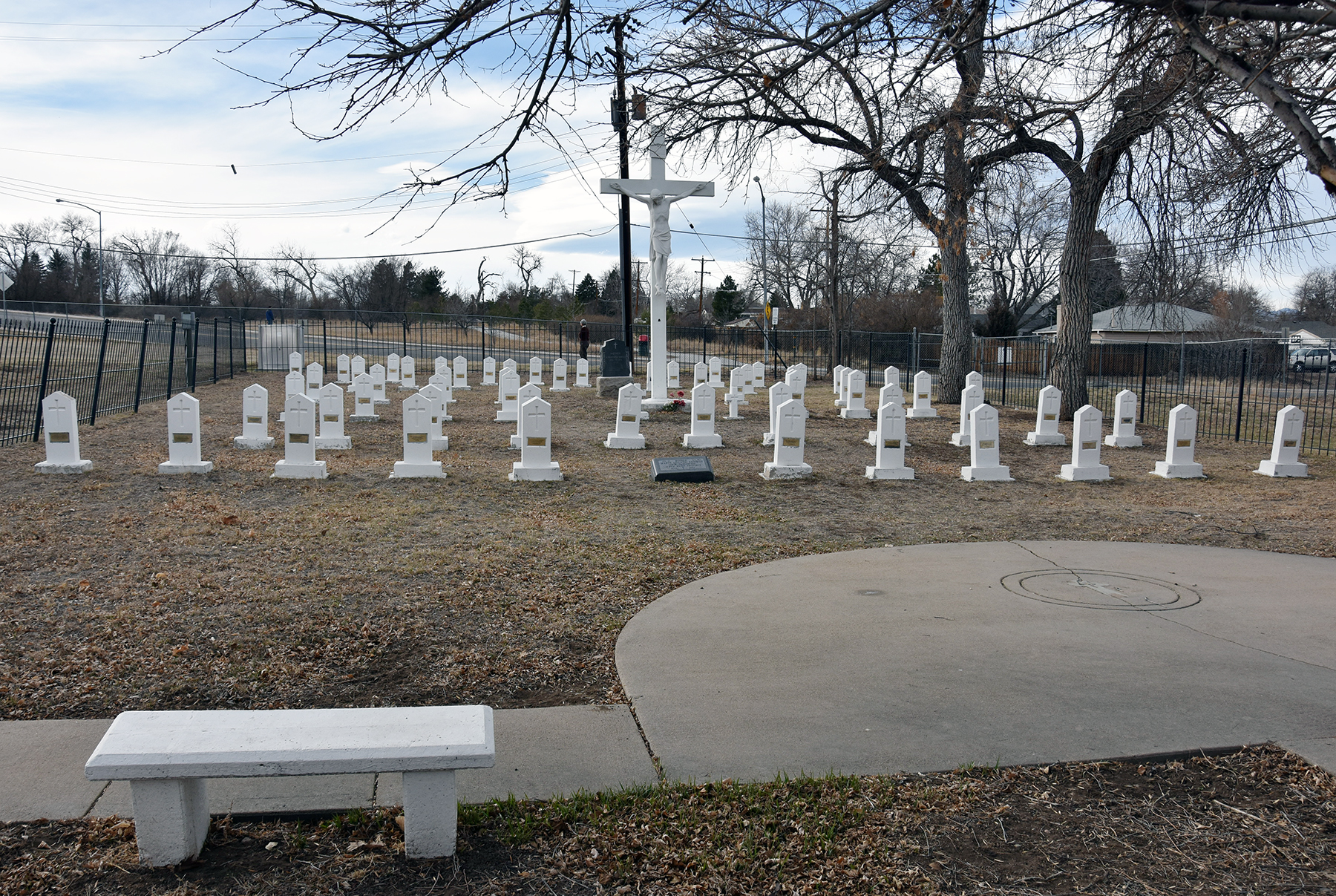 Holy Ground — The first of 62 Sisters of Loretto was laid to rest at the Loretto Heights College Cemetery in 1896. The last burial took place there in 1969. (Photo by Ruth Routten)

For a century and a quarter the iconic tower of Loretto Heights has stood atop Sheridan Hill in southwest Denver. Sister Pancratia Bonfils, niece of Frederick Bonfils, founder of the Denver Post, purchased 40 acres to establish Loretto Heights Academy in 1888. Loretto Heights College (LHC) began in 1918, continuing until 1989 when the campus was deeded to Regis College. Teikyo University purchased the college that same year. November 2016 Teikyo announced its intention to sell the campus. Loretto’s first concern was that of our cemetery and the 62 Sisters of Loretto buried there.

Pearl McGivney asked Ruth Routten and me to explore options and research practical details regarding the future of the cemetery. This was not our maiden voyage on the LHC Cemetery. In 2015, Lydia Peña enlisted our cooperation to secure the replacement of five deteriorated gravestones, which led us to Good Samaritan professionals to accomplish the mission. Throughout the past four months, the 62 lives spent in loving prayer and service on whose shoulders all Loretto stands and who now rest at the foot of the cross propelled us forward. In consultations with Pearl, we pursued several options.

Several cemetery directors and Denver Archdiocesan officials have provided consultation on the legal and procedural requirements for exhumation and reburial. Exhuming and re-burying at our Kentucky Motherhouse cemetery was not deemed practical. We extensively considered exhuming and re-burying in Denver’s Catholic Mt. Olivet Cemetery. Loretto has 38 available plots there where 22 Sisters of Loretto already are buried. The first burial at LHC Cemetery was in 1896 and the last took place in 1969 and thereafter at Mt. Olivet. Ultimately, the costs seemed prohibitive.

Teikyo verbally suggested deeding the cemetery to the Sisters of Loretto expecting that we would keep the cemetery in its original location. To date, we have not received a formal proposal. However, with the enthusiastic support of many in Denver, we are proceeding with plans to retain the cemetery and secure arrangements for its perpetual care. In addition to the cemetery proper, there will need to be access from the city street, land for visitor and maintenance vehicle parking, access to water and electricity and buffer land between the cemetery and the 78 acres of the campus.

The Archdiocese of Denver has expressed willingness to contract with Loretto for perpetual care of the cemetery. Encouragement and assistance to retain the cemetery has come from historical preservationists, neighbors and neighborhood association representatives, Regis College personnel, alums and the Southwest Denver city councilman. Attorney John Stewart, from the historical preservation group, has offered his assistance for negotiations with Teikyo. At several neighborhood stakeholder meetings, we’ve heard, “Don’t disturb those sisters. We love them being there.”

Education will continue on the campus as College View Middle School plans to purchase additional acres for a cafeteria. We have been encouraged by a recent resolution from a consortium of Denver neighborhood associations asking the city to purchase all or some of the campus and to keep the main Tower 1890 historic building standing. They also desire that the Loretto Heights campus be “transformed into a public use area that maintains the cultural heritage and beauty of this pastoral campus.”

In the words of loyal Holy Family alumni and Loretto friend Dennis Gallagher, “Let us not forget the great contribution the sisters made in many lives.”

Mary Nelle was raised in Texas and graduated from Loretto Heights College ('66) where she met the Sisters of Loretto. After entering Loretto in 1967, she taught English, speech and drama at St. Mary's Academy and Machebeuf High School. Mary Nelle joined Sister Susan Carol McDonald in Saigon, Vietnam, to care for orphans and to assist with their adoption. For 20 years she resettled refugees for several church agencies. For 30 years she has done customer service at American Airlines and does occasional marketing for EarthLinks. She is involved in the preservation and re-development of the LHC (Loretto Heights College) campus.