LGBT Catholics Are Hopeful in the Age of Pope Francis 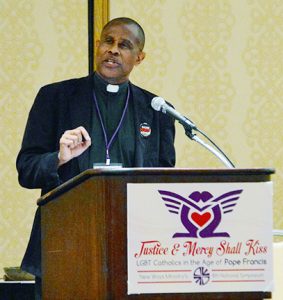 Although the rain came down in a deluge all weekend, the 300 Catholics gathered at a Chicago hotel April 28-30 didn’t seem to be bothered. Inside it seemed like a rainbow of participants and presenters who discussed the theme “Justice and Mercy Shall Kiss: LGBT Catholics in the Age of Pope Francis.”

“What a wonderful, enlivening gathering of people of great heart and great hope,” said Anna Koop, who represented Loretto at the gathering. The Loretto Community, along with 50 other LCWR and various national organizations, proudly endorsed the event.

Despite these and other examples of his welcome and concern about LGBT people, Pope Francis has not changed the official Church teaching on sexual ethics, which is so hurtful to LGBT people. This is the indictment continually raised against this good man, who encourages the world to show mercy and justice to all.

Massingale used a good American image to unscramble this puzzle. Imagine, he said, that the Church is a big football field and that Pope Francis is on our team, but he’s playing defense, not offense. He’s blocking and holding the opponent who would trounce us. He’s clearing the way so we can move forward and gain a touchdown. Francis is saying, “You’re the Church. I’ll help, but you score the points.”

This analogy especially resonated with the younger folks. Matt Myers was impressed by the people in their 20s and 30s who attended. “They give me hope for the future of the Church,” he said.

Frank Mugisha, the director of sexual minorities in Uganda, spoke of the Catholic bishops’ fueling the African laws that would make it a crime merely to be gay.

With workshops dealing with LGBT Church workers, parish ministry, transgender and intersex issues, Hispanic, young adult ministry and LGBT people in priesthood and religious life, there was so much to discuss that many participants arrived early to attend a daylong retreat given by Sister Simone Campbell of “Nuns on the Bus” fame.

All who came brought “hope and frustration,” Massingale said. They were hoping for a more favorable reception of LGBT people by the institutional Church, but they felt frustrated because that full acceptance has not arrived.