Posted on November 6, 2020, by Loretto Community 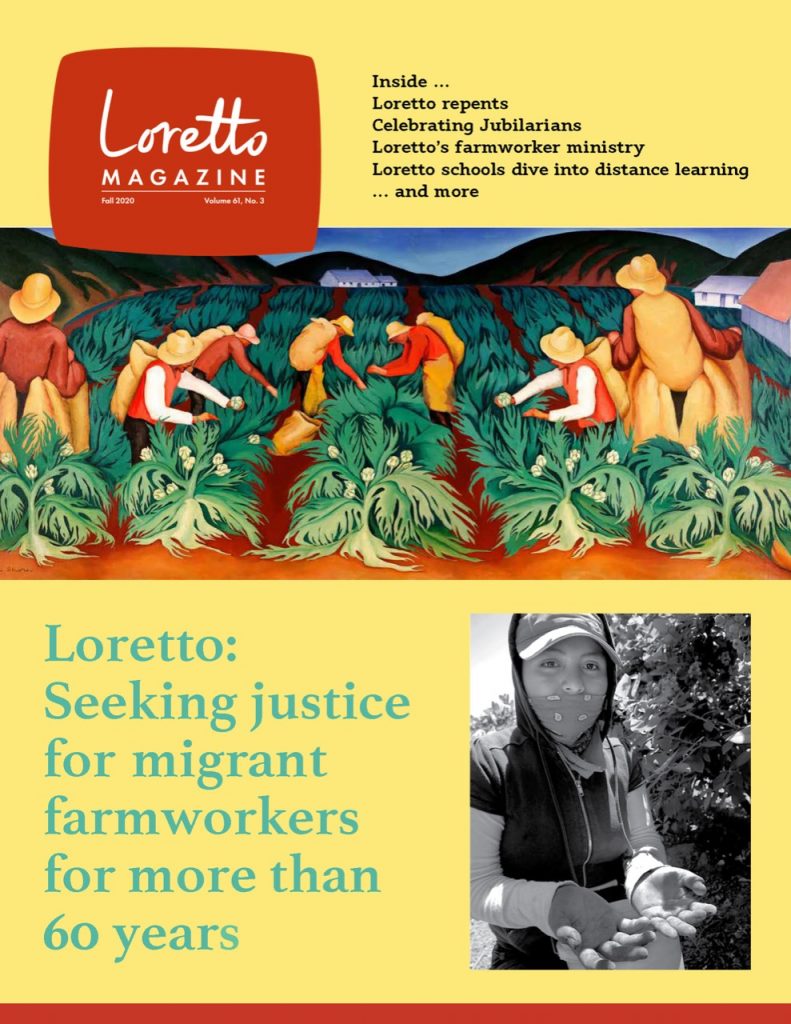 Standing up for racial justice

On the value of protesting, Eleanor Craig SL says: “I often think of a conversation I had with Dorothy Day when I was young and she was old. I asked her, since much of the protesting she had done had not succeeded, what was the point? Her reply came quickly: ‘I didn’t do it for the results, I did it because it was the right thing for me to do.’ I feel that’s what I’ve agreed to, to show up, walk shoulder to shoulder with others. To stand up and be counted.”

Ann Rhodes, the youngest of the first six Sisters of Loretto, arrived at the log cabin that was to be home and school with Tom, an enslaved man, her property. It was 1812.

“We met migrant farmworker families who lived in terrible situations, shared simple meals with them and held songfests. We learned their needs and responded; this included gathering their young children from the fields to begin day care programs, facilitating reception of sacraments, enrolling their children in migrant schools, taking them for medical care, planning fun nights when all of the migrant families were invited to come together, young and old. We offered friendship and care …”

Mary Jean Friel CoL and her three grown children, Nathan, Michael and Carolyn, attended the San Diego premier of the 2014 movie “Cesar Chavez.” During the years the movie covers, Mary Jean was César’s assistant, answering calls, arranging meetings and dealing with whoever came looking for him. By the end of the movie, which took us to 1978, Nate was almost 3; Mike was 2 and Carolyn was still nursing.

In the early 1970s Pearl McGivney traveled to California to work with nonviolent organizer, activist and labor leader César Chávez. Pearl opened a legal aid office in Salinas. She fought for justice alongside farmworkers, helping to organize boycotts and strikes.

Jossy Eyre founded Women’s Bean Project (WBP) in 1989 as a result of her volunteer work at a day shelter for homeless women. Jossy saw that while the shelter kept women safe, it wasn’t helping them make lasting changes in their lives. Jossy bought $500 worth of beans and put two homeless women to work — the first step in building Women’s Bean Project, the social enterprise. Jossy believed that paying women a wage was critical for self-respect and long-term success, and that chronically unemployed women needed a job training program with a longer duration and more intensive services than those generally available.

Madeline Beulieau, pictured at left, is the first Loretto Volunteer serving at Women’s Bean Project (WBP). Madeline grew up in Vestal, N.Y., and attended Canisius College to play collegiate level soccer, while pursuing a degree in biology and a minor in Spanish. She was excited to move to a new part of the country for the first time and be a part of the Loretto Community and Loretto Volunteer house in Denver.

Stepping into LoVo’s directorship with a full heart

“2020 is a turbulent time to enter a new role, particularly one centered in working for justice and acting for peace. And yet, I feel a sense of grace in the opportunity to rise to the challenges of this time, both in my life and in my work with Loretto.”

Loretto rises to the challenge of distance learning

Loretto Academy students, faculty and staff members are busier than ever. We are thankful for the resources to continue to educate our students and to continue to nurture a strong sense of community.

We have ensured that all students have access to the technology they need to work from home, and our teachers are creative with interactive assignments. Students have written poems, taken photos and drawn to express their emotions during this uneasy time.

When the government started online classes for children of all grades, we sisters pasted our web address on our school’s gate for the parents. Abid is one of the students in our school. His mother asked how she could use that link for her children who study in our school at different levels. I told her I would write out the link and she could get online on her phone so her kids could attend classes. I asked her to show me her phone; “I have no phone,” she said.