Posted on December 8, 2021, by Loretto Community 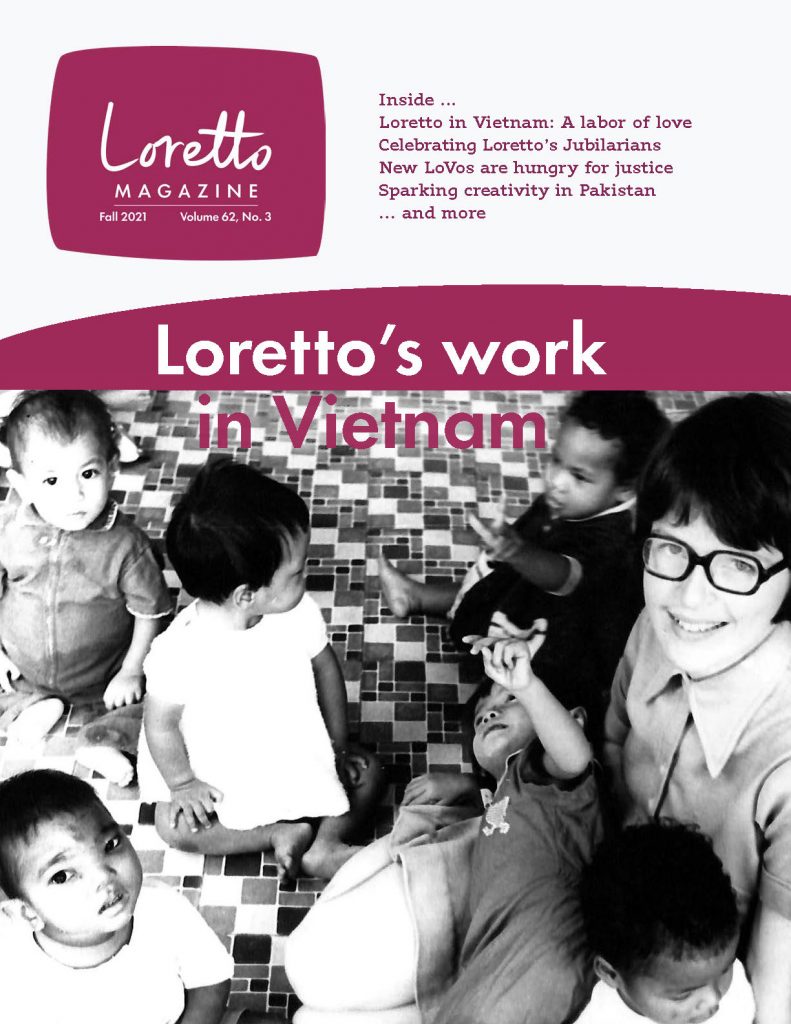 Walter Cronkite began his nightly CBS evening news broadcast with the death count from Vietnam from the late 1960s through the early 1970s. As a young newly professed sister and a high school speech, drama and English teacher, my abiding thought was, “What could I do that would be positive?” In the spring of 1973, my former Loretto Heights College classmate, Susan Carol McDonald — who was now Sr. Susan Carol, a nurse at our Motherhouse in Kentucky — announced that she would be volunteering to nurse orphans in Saigon. During a Holy Week Motherhouse visit, I told Susan that if there was something someone without medical skills could do, I would come to help. In early June, six days after her arrival, Susan wrote to me and said, “Get your passport, get your shots; I need help.”

On the ground as the North Vietnamese army advanced

Aiding orphans in Vietnam wasn’t new to Ruth Routten CoL, an American Airlines flight attendant who, on her days off, had escorted children from Vietnam to adoptive families starting in 1973. After the C-5A crash in early April 1975, when she returned to Saigon to assist with the final evacuation, the situation on the ground had become acute. Orphanages were once again at full capacity as Catholic sisters from provincial orphanages brought more and more children. Finding flights out had become nearly impossible. After a promised flight for the orphans had been canceled by a charter aircraft company, Ruth, with Susan Carol McDonald SL, Rosemary Taylor and Australian volunteer Sr. Doreen Beckett brainstormed evacuation options.

A life lived for the sake of the other

In May 1973, 28-year-old Susan Carol McDonald SL arrived in Vietnam to work with Rosemary Taylor, an Australian nurse who had been caring for orphans and arranging for their adoptions since 1968. Susan, a registered nurse, was asked to take over New Haven Nursery.

TV reports had not prepared her for the stark poverty on the ground — she described seeing people living along the Saigon River which was used as a sewer — but from the beginning she loved her often heartbreaking, often life-saving, work. The newborns arrived one after the next in precarious health, frequently premature and very low-weight. Epidemics struck the orphanages mercilessly. Birth defects and disease were widespread — diseases that a young woman hailing from Colorado had never seen. Children arrived with, or came down with, polio, typhoid, cholera, diphtheria, pneumonia, tuberculosis, meningitis, measles ….

Flames of love and commitment burn on after war

When Susan Carol McDonald SL returned from Vietnam in 1975, she knew her life had changed. She knew that the work she felt privileged to do in Vietnam with abandoned children would be a path she would take for the rest of her life. And so it was.

She kept in touch with many of the adoptive parents as they began to raise the infant they had welcomed into their families. She answered questions, told stories, shared memories of each child and their known beginnings with adoptive parents worldwide.

The newborn was dropped off at New Haven Nursery where Susan Carol McDonald SL was the director. She logged the baby into her register, as she did with every arrival.

Building a preschool in Vietnam

Paulette Peterson CoL had started preschools in the U.S., so when she arrived in Vietnam in 1974, she went to work establishing a preschool at an orphanage. She teamed up with a local woman to develop activities and lessons adapted to the culture. Lessons included working on numbers and language skills — for instance, identifying objects and building vocabulary. “Some of the kids had polio and physical limitations so we did physical activities in the water, we sang songs.” Local men carved animal puzzles made of wood: elephants, giraffes, lions; they also made tables and chairs for the school. Paulette had to leave abruptly when she learned her father was ill with cancer.

We are excited to kick off the 2021-2022 Loretto Volunteer Program year! We have welcomed seven volunteers who are serving with social justice organizations in Denver and El Paso while living in intentional community and deepening their engagement with Loretto values.

St. Anthony School is situated in the slums of Lahore where people earn $1 or $2 per day. The students come in uniform so no one can judge their economic backgrounds. Our school is in the old convent which does not have much playground space nor proper classrooms. This does not hinder the kids from learning and being educated, but what to do about games, one of the important components of maintaining and developing the child’s healthy mind and body?

Subscribe to be notified about new Loretto Magazine issues Expand