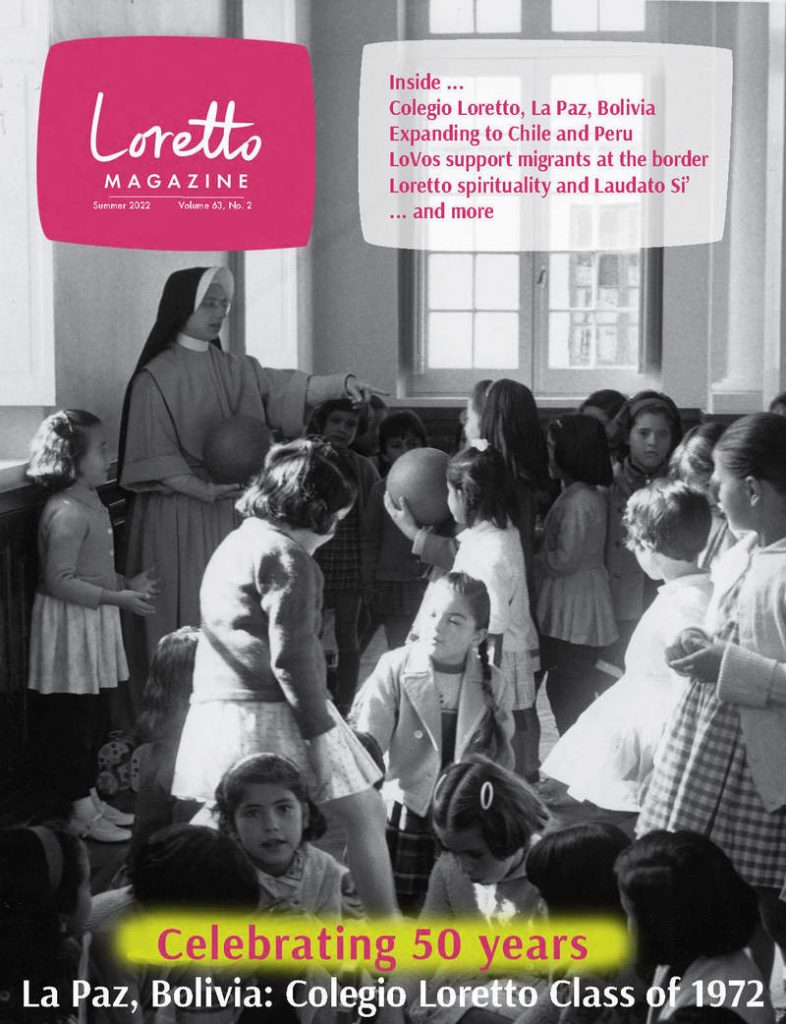 For more than 22 years Mary E. “Buffy” Boesen SL has headed Loretto Academy in El Paso. She arrived to act as interim president for the 2000-2001 school year, fell in love with the school’s extended El Paso/Juarez, Mexico, community and decided to stay. Buffy, who entered the Sisters of Loretto in 1978, will act as Loretto Academy’s advisor to the president for a year to facilitate a smooth transition. Her post-retirement plans include traveling, spending time with family and friends and continuing to serve the Loretto and El Paso communities.

“We are in the city of La Paz, Bolivia, in a beautiful valley with an imposing mountain, the Illimani, which is the guardian of the city and at the same time marks its identity.

“Among the residents of this city, word spreads that a new school will open and it will be bilingual, English-Spanish. It will be run by nuns from the U.S.A. and two courses will be opened, kindergarten and first grade.” Thus writes Frida Pett, among the first students to attend Colegio
Loretto in La Paz.

50 years later: ‘The seeds have grown into strong, tall trees …’

Sister Eva Marie Salas and I have kept in touch on and off over the years. In one of our correspondences, she said that she had helped plant 15,000 small trees around the Loretto Motherhouse. I responded:

Evita, you said that planting 15,000 trees was very special to you. But long before you planted those trees, you, and the Sisters of Loretto, sowed many seeds in La Paz, Bolivia, and now those seeds have grown into strong, tall trees, with branches that extend high and wide around the world. We, your students, have been successful in life because of what we learned under your quiet and steady guidance. There is much for you to be happy about.

In 1964, two years after Colegio Loretto opened in La Paz, Bolivia, a Loretto house opened in Tacna, a city in the Andean foothills of southern Peru.

In these photos, Guadalupe “Lupe” Arciniega, who had taught at Colegio Loretto in La Paz, teaches adults and children in Tacna.

LoVos come together in support of migrants

Encuentro is Spanish for meeting, gathering, encounter — the act of coming together. For the Loretto Volunteer Program, our experience of encuentro at the U.S.-Mexico border in El Paso this past March was eye-opening. This was the first time since the start of the COVID-19 pandemic that Loretto Volunteers gathered in-person instead of online. It was the first time the LoVo Program returned to the border in several years, joining with the Loretto Community in its work there for justice and peace and encountering the harsh realities of the migrant experience.

In “Laudato Si’” Pope Francis urges upon us nothing less than an ecological conversion. Conversion connotes a life-changing spiritual, and resulting physical, transformation. It can be something familiar, like leaving all to follow a religious vocation, or welcoming a baby into a home and community. Like birthing, it can come through a measure of upheaval, but the point is the ecstasy.

The Laudato Si’ Action Platform (LSAP) sets forth seven goals. The spirituality goal reads: “Ecological Spirituality springs from a profound ecological conversion and helps us to ‘discover God in all things,’ both in the beauty of creation and in the sighs of the sick and the groans of the afflicted, aware that the life of the spirit is not dissociated from worldly realities.”

I often find myself the only woman on the seminary staff or the National Education Commission, and this inspires me to change the gender in Luke’s verse to “Blessed are you among men.” Pakistan has a very strong patriarchal society where women are considered insignificant and taught to think less of ourselves. The cultural attitude sneaks into religious communities as well. Women inside and outside of religious communities are lagging behind in all spheres of life, be it education, health or other settings.

Pancratia Hall has been carefully restored and renovated into affordable housing apartments including a number of three and four-bedroom units suitable for families.

Hartman Ely Investments’ announcement of the grand reopening read, “Pancratia Hall, named for Mother Mary Pancratia Bonfils, founder of Loretto Heights Academy, was designed by noted architect Henry W. J. Edbrooke and completed in 1930. The adaptive reuse of the classroom and dormitory building into 74 affordable housing residential lofts will provide a unique opportunity for families to live in a building that celebrates the rich history of Loretto Heights.”