Remembrance of the Life of Barbara Agnew CPPS, CoL

Posted on October 9, 2016, by Loretto Community

Sister Barbara Agnew was born in Dayton, Ohio, the older of two children of Walter Ignatius and Marie Katherine Weiser Agnew. She grew up in Cincinnati and attended Regina High School where the Sisters of the Precious Blood had a great influence on her. She formally entered the Sisters of the Precious Blood on Feb. 2, 1949, at the age of 23 and was given the name of Sister Mary Madeleva; she later returned to using her baptismal name.

In her application for Loretto Co-membership, Barbara provided the following brief autobiography:

“Entering the Sisters of the Precious Blood a year after graduating from Edgecliffe College in Cincinnati, I was assigned to elementary school teaching in Cleveland. After five years, I taught math, English and Latin in a small high school in Wapakoneta, Ohio. Meantime, having completed a master’s degree in theology at Notre Dame, I was assigned to the junior college at the Motherhouse, where I taught history and logic, then on to a high school in Cincinnati, where I chaired the religion department.

“In 1965 I began doctoral studies at Catholic University, accepting a position at Villanova University in 1969 while completing my dissertation. At the same time, I was a member of several renewal chapters of my congregation and active on all the major committees at one time or another. At Villanova I served on the Senate committees and chaired various committees within my department. I have been responsible for organizing, staffing and publicizing dozens of academic workshops. 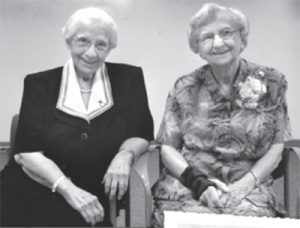 “From 1972-75, I was a member of the Faith and Order Commission of the National Council of Churches. Since 1977 I have been interested in and am certified to give Intensive Journal Workshops. Since 1981 I have served as adjunct professor of theology at Mary Immaculate Seminary, Northampton, Pa., as well as continuing to teach at Villanova University.”

Barbara began her Loretto acquaintance through contacts with Ann Patrick Ware, with whom she worked while at the National Council of Churches. Barbara continued her contacts with Loretto through Interchange. In 1979 she was attracted by an invitation she found in Interchange to attend a year-end retreat at Loretto Motherhouse directed by Elaine Marie Prevallet. She appreciated the stimulation she found among Loretto women. In July 1980 she attended the Loretto General Assembly, the first of several. Through the early 1980s Barbara pursued a deliberate program of acquaintance with Loretto, considering the possibility of transferring from her congregation to Loretto to participate in a more active commitment to social concerns and intellectual challenge. After a number of Loretto immersion experiences, including some weeks in El Paso, at the Denver Catholic Worker and at Loretto Motherhouse, Barbara concluded that she wished to remain a Sister of the Precious Blood, but she also wished to draw on Loretto inspiration. She wrote in her Co-membership application:

“Having known Loretto for years through Interchange, having received assistance for a Chinese student through the 2% Fund, I turned easily to Loretto when I needed to examine my membership in my own Congregation. Among you, I found concretized the vision I try to live by, a double depth of apostolic intensity and contemplative insight; I also found the welcome, assistance and healing which has enabled me to choose to continue in my original commitment. But I would like to be more deeply a part of a community that has pushed me on, inspired, encouraged, advised me, critically and constructively. In co-membership, I feel, I would possess even more fully what you have given me, and stand plainly ready to make what return I can.”

Barbara was accepted as a Loretto Co-member May 6, 1984, just as she prepared to leave for a two-year teaching position in Australia. When she returned, Barbara celebrated with a group of other new Co-members during the 1986 Assembly in St. Louis.

Barbara continued teaching, writing and doing research as a theologian and faculty member at Villanova University until 1999. After a lifetime spent as a teacher, retirement took her quite beyond where academia had ever led, to efforts at faith-formation in the parish, literacy training in city prisons, and working in a residence of formerly homeless men and women.

In a recent update to her Loretto Co-membership commitment, Barbara wrote: 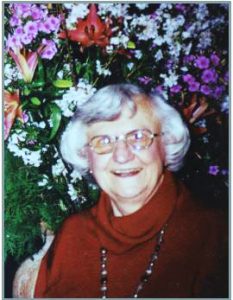 “It seems that the very growth I have experienced through Loretto has drawn me deeper into my professional work and launched me into new projects, so that I have less time to be directly involved with the Loretto Community than I had before. I must cut back on what I can offer, but still desire co-membership for the vision of life I find in your publications and ongoing projects. [I commit myself] to be faithful in friendship to the many Lorettos who have welcomed and assisted me. And to share your Loretto spirit and knowledge of your lives with others.”