Remembrance of the Life of Sister Lois Zeis SL

Posted on October 3, 2016, by Loretto Community

Sister Lois Zeis was born in St. Louis at the very end of 1924; early in the new year she was baptized Irene Ann. Her parents, Frank and Mary Brune Zeis, were natives of small towns near St. Louis. They made their home on the north side of St Louis, where they worked and raised Irene, her sisters, Rita and Mildred, and brother, Lawrence. The children attended grade school in St. Philip Neri Parish with the Sisters of St. Joseph. The girls attended St. Alphonsus Rock High School with the School Sisters of Notre Dame. Rita joined the SSNDs. Irene enrolled at Webster College, from which she graduated in May 1946 with a degree in sociology and English. She took a teaching position at Notre Dame High School in St. Louis County.

Although she was teaching for the SSNDs, it was to Loretto that Irene wrote in October 1946: “Upon the advice of my spiritual director, I am writing to ask for some information about your order and its rules. Even though I have attended [college] conducted by your sisters, I still know very little about them. … I am 21 years old and have graduated from Webster College. At present I am teaching [English and citizenship] at Notre Dame High School in St. Louis. I was a member of the group from Webster which came down [to Loretto Motherhouse] for Reception Day Dec 8, 1945. I think I have a vocation. I am praying that I may have one. I will appreciate everything that you can tell me about your order.”

In the exchange of information and the completion of application forms, Irene became more certain, writing to Mother Edwarda at Christmas time, 1946, “When I had written to you the first time I was not too sure of exactly what I wanted. Now my wants are very clearly defined. I know what I want to do and how I want to accomplish it. I want to serve God in a special way as a Sister of Loretto. I pray that I may be worthy of this privilege.”

Irene arrived at Loretto Feb. 15, 1947. “Like most of us, I was feeling homesick and lonely. I was grateful [for one particular] postulant, Rita Ryon. We developed a closeness which lasted until her death on Aug. 1, 1979. The regular schedule in which we seemed not to have a free moment enabled me to fit into the routine very well. I had never eaten sorghum or drunk buttermilk and that was an adjustment. After leaving the novitiate, I never touched either one.”

On Aug. 15 that year, Irene received the habit and the name Sister Mary Lois. She made her first vows two years later, Dec. 8, 1949, going from the novitiate to New Mexico to teach for the second semester at Our Lady of Sorrows High School, Bernalillo. From there she went for two years to St. Joseph Academy in El Paso and then to Mobile where she taught a total of 12 years, with a one-year interruption to go to Loretto Academy, Kansas City, Mo.

In an autobiographical sketch, Sister Lois wrote: “Being a nun in today’s world [has] changed. … I have never been an activist person. I was content to teach school. There were some times when I found this difficult, especially when I did not have adequate background or preparation. In college, I had changed my major three times, which gave me minimal credits in many subjects. I spent 12 years in Mobile, Ala., and the state educational standards were not high. So, according to them, I was qualified to teach subjects with as few as six credit hours. The shock of my life was becoming a biology teacher overnight. The principal thought she had told me about that class, but she hadn’t. I was able to teach chemistry with 12 credits. Having been told that early in the summer, I received some help in that area from Sister Frances Louise [Ritter]. I realize that all elementary teachers taught many subjects during the day. However, I found it difficult to prepare for five different classes of longer lengths each day.

Lois’ dedication to being prepared and keeping prepared for a variety of classroom subjects is evident from the long list of federally funded summer workshops and institutes in which she enrolled, beginning in the early 1950s. She also completed three master’s degree programs: in 1963 at St. Louis University in education and chemistry; in 1970 at St. Mary’s College in biology; and in 1974 at St. Louis University in social work. The MSW degree allowed Lois to combine social service work in health care with classroom teaching at Loretto Academy in El Paso. Lois lived and worked in El Paso for a total of 30 years. Near the end of her time in Texas, Lois wrote: “People either love or hate El Paso. Personally, I like it because of the community spirit and the climate.”

In 2004 Lois returned to her hometown, St. Louis, living at the Loretto Center. For the next dozen years she experienced several health challenges. Nevertheless, Sister Barbara Ann Barbato characterized Lois in a newspaper article in 2007 this way: “Lois is an indomitable woman. She overcomes obstacles that would daunt most. She exercises and swims on a daily basis. She has an eye for detail, often noticing an unmet need of another and quietly rectifying the situation. She lived for several months at Cedars of Peace, the hermitage at Loretto Motherhouse. She relishes time and quiet for prayer and spiritual reading.”

Lois moved to Loretto Motherhouse Infirmary in 2012, with declining health but unimpaired dignity. She died quietly on Tuesday afternoon, Sept. 27, 2016, in the 70th year of her Loretto commitment, having done what she wanted to do. She served God in a special way as a Sister of Loretto. 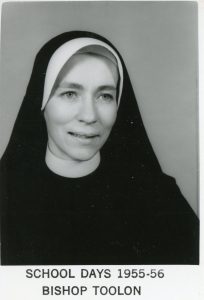 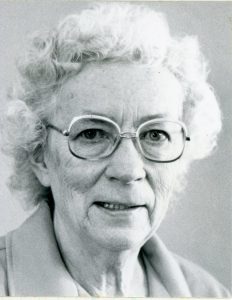 Lois was a longtime teacher.