Remembrance of the Life of Sister Severin Duehren, OSF, CoL

Posted on September 14, 2016, by Loretto Community 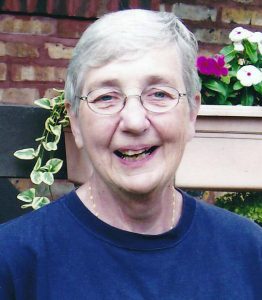 Franciscan Sister Severin Duehren was drawn into Loretto Co-membership in 1985 by her eighteen-year friendship with Loretto Sister Rose Annette Liddell, with whom she had roomed for a year of study at Ohio State University in 1967-68.

Born in St. Joseph, Missouri, in 1935, she was baptized Shirley Ann, the third of the six children of William and Mary Alice Duehren. Although raised in Concordia, Kansas, Shirley left home for Winona, Minnesota, where she earned a Bachelor’s degree in Medical Technology from the College of St. Teresa. Soon after she joined the Rochester Franciscan community, becoming known as Sister Severin, her mother’s maiden name.

Severin’s many professional accomplishments are succinctly enumerated in the Remembrance written by her Franciscan Sisters:Sister Severin earned a Master’s Degree in Clinical Pathology from Ohio State University (1969) and a Master’s Degree in Hospital Administration from St. Louis University (1984). She served for seven years as a Medical Technologist at Mercy Hospital, Portsmouth, Ohio. Following studies at Ohio State University she served ten years as Clinical Microbiologist at Scioto Memorial Hospital in Portsmouth. During and after this time she also served in Congregational Leadership for the Sisters of St. Francis in Rochester.

After a year of transition, Severin served as Executive Director of Scioto County Children’s Service, Portsmouth (1994-1997). Severin returned to Rochester following a sabbatical and served in Congregational Ministry as Director of Congregational Spirituality Centers and Co-Director for Assisi Heights residents. She retired in 2006 and continued to do volunteer work until she moved to Assisi Heights in 2010.

Severin’s contributions as a Loretto Co-member are enumerated in several comments in her Loretto files, beginning with a comment by Mary Fran Lottes, who was the first to officially welcome Severin to Co-membership: “It is a joy to think of you as a Co-member and of the new bond between the Franciscans and the Lorettines.”

Rose Colley, writing at the time as a member of the Loretto Work Development Staff, commented “Severin’s expertise in the medical field will be a real asset to the ongoing development of life and ministry for Loretto, for the Franciscans, and for the church and world. Connections between communities are more important than ever these days!”

Rose Annette wrote about her friend: “Sevie has always been forward-looking and very challenging both to me and to religious life. I find her compassionate and courageous—which is a rare blend of virtue. Sevie will help us look at religious life from the gospel stance and that of St. Francis. She will also be very supportive of the stands we take. I think this networking together of religious orders is a new and marvelous happening, and I’m happy that Sev is one of the first to have the courage to do it.”

Severin herself commented after some years as a Loretto Co-member, “I like being a Co-member. It has linked me with a group of women and men who share similar values and it has strengthened my own understanding of my religious vocation. Thank You!”

Sister Severin’s obituary provided by the Rochester (Minn.) Franciscans may be found here.