Posted on September 9, 2016, by Loretto Community 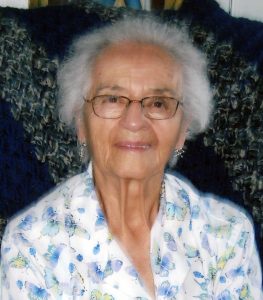 Rosalia Duran Guevara, who died in Albuquerque, N.M., Aug. 26, 2016, was a Loretto Co-member for 21 years and a Sister of Loretto for 20 years. Rosalia began her association with Loretto in 1937 when she attended the public high school taught by Loretto Sisters in the small mountain community of Mora, N.M., close to the prairie towns of her birth, Rainsville, and Sapello, where she was baptized. Rosalia was the first of the five children of Emilio and Franscisquita Cruz Duran, who raised their family in the shadow of the Santa Fe Trail and sent Rosalia to Loretto’s first school in the southwest, Our Lady of Light Academy in Santa Fe, to complete her high school education in 1939-41.

At the time of her application for Co-membership in 1995, Rosalia wrote an autobiography, lovingly including many details of her early Loretto experiences and paying tribute to her Loretto mentors and friends.

“[At the Academy in Santa Fe] I was very close to the Sisters as I worked in the summers for my tuition. I had two special friends, Sister Philibert and Sister Severina. Sister Severina took me to the chapel, up to the choir one afternoon and said to me, ‘I think you have a vocation. …’ I said, ‘Yes, I would like to be a sister like you,’ so we prayed and filled out the papers. I got a physical and had my teeth cleaned and cavities filled, and everything arranged. I left for the novitiate … with Sister Carmelita from Las Vegas, N.M., and along the way we picked up Sister Carlos Marie and the three of us went on to the Motherhouse. We got to the novitiate early, days before the rest of the class; we had fun, didn’t follow any regimen until all the class members came.”

On April 25, 1941, Rosalia received the habit and the name Sister Maria, by which she was known until 1960 as she served as cook and housekeeper in Loretto communities from the Motherhouse to Kansas City. Rosalia recalled, “Broadway was one of my favorite missions. Mother Edwarda said to me, ‘I am sending you to Broadway and there you will learn much more about cooking as there are only 20 Sisters in that community.’ And sure enough, I learned a lot about cooking and also a lot about how to order food. Sister Rose Maureen, now Sister Helen, helped me a lot. She was such a dear mother to us all, and she is a good friend of mine. I went to make my final vows from this community in 1946.

“After my final vows I went to the Motherhouse again, and in 1949 I was sent to Kansas City where I was in charge of the laundry and housekeeping; it was a nice change from the cooking routine. In 1953 I was sent to Bethlehem in St. John, Ky. Back to cooking again. It was when I lived at Bethlehem that I started to ask myself questions and to be truthful about myself and my life. I perceived that I no longer was pleased with my performance as a religious. Sometimes I couldn’t even pray and this bothered me very much. I kept going with this torment five more years. Sometimes I asked myself: Is it the devil that is tempting me, or is it the Lord that wants me to enjoy a different kind of life? Anyway, the decision was not easy.

“[In the summer of 1960], I went to Santa Fe for the August retreat. After having prayed and pondered and considered carefully and according to my conscience, I decided to ask Sister Januarius to get me a dispensation. It took her only two weeks. I left from Santa Fe.”

Rosalia went to her family in Rainsville, moving with them to Roswell and later to Albuquerque, N.M. While working at St. Mary’s Hospital in Roswell, Rosalia met George Guevara, a long-term patient at the hospital, whom she would marry years later. Seeking a better salary, Rosalia moved to southern California where she began a career in healthcare and social service, first in residential care management but soon in direct care of the elderly and individuals with dementia.

In 1985 Rosalia received an invitation from Sister Helen Sanders to attend a reunion of everyone who had been a Sister of Loretto, to be held in the mountains in Colorado. “I was so thrilled to hear from her, as I hadn’t heard from the Sisters or about them for more than 15 years. Unfortunately, I couldn’t attend. The following Thanksgiving, I went to Denver to visit Sister Helen. I read the book she wrote about the changes. At first I couldn’t understand why the changes, but now I do. I think with these changes there is more freedom to do for humanity where it is needed the most. In the early ’90s I worked in Denver one summer, I got in touch with Sister Helen, and I enjoyed having her visit me for a while one evening. We talked about Co-membership. Many times I had thought of asking about my becoming a co-member, but I had never done anything about it until that summer. I wrote to Sister Helen and told her that I wanted to be a co-member. She told me to keep on hoping and she would write to the people into office about sending me an application.

“I have not changed much. When you have been a Sister for 20 years you live by the same principles and faith. I thank the Sisters of Loretto for the training they have given me, the moral example and discipline and the love and care they showed me and George when we were at Loretto on a visit. We have not gotten over the heavenly feeling we experienced while there.”