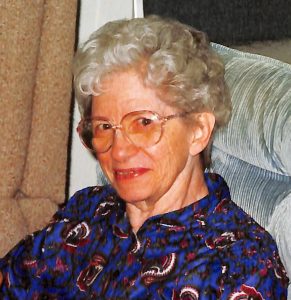 A very small card rests in the personnel file of Sister Veronica Marie Schneider. It reads, “Announcing the birth of a Daughter on December 3, 1925, [to] Mr. and Mrs. George F. Schneider.” Veronica was the fourth child and only daughter of George and Willamena Reis Schneider, natives of New York and Missouri, respectively, and residents of Los Angeles.

Besides the little card announcing her birth, Veronica gave the Archives many autobiographical notes, beginning with this account of her early years: “My elementary school years were spent at Nativity School in Los Angeles, under the direction of the Sisters of St. Joseph of Boston, for four years before they were recalled to their own diocese. … I first met the Sisters of Loretto when they took over our parish school in the autumn of 1936. I spent three years under their supervision after which I began my high school education at Ramona Convent with the Sisters of the Holy Names in Alhambra, where I was a resident student.

“My mother was active in church activities and was always doing something for the priests or Sisters. I too, then became more interested in the Sisters, and tried to help them when I could. I feel that this was God’s way of telling me He wanted me to be as I am today, a Sister. … My dear mother had died on Sept. 8, 1941, so she was not with me when I told my father of my decision. My choice had been high on her list of desires.”

In late May 1943, before graduating from high school, Veronica wrote to Loretto’s Superior General, Mother Edwarda, as follows: “All year I have been debating which of the two orders to enter, the Sisters of the Holy Names or the Sisters of Loretto. Loretto is my final choice. Since … my mother died, my father and I have lived alone — that is on weekends and vacations. He is anxious to see me settled in life and has no objections to my becoming a Sister.

“I trust that this information is sufficient for you to judge of my acceptability. I am no stranger at Nativity Convent and Sister Mary Richard at St. Pius Convent in St. Louis can give you further items about me. You may be assured I shall anxiously await your decision.” Mother Edwarda replied within the week: “Thank you for your letter which made us very happy. We are always glad when our own girls want to come to Loretto, and we consider you as one of our own, since you took your grade school work with our Sisters at Nativity School.” She concluded her letter, “The accompanying [postcard] airplane view will give you some idea of Loretto.”

In mid-September of 1943 Veronica again wrote to Mother Edwarda, thanking her for advice about traveling to the novitiate and adding, “My appreciation for all that has been done for me will not be able to be expressed in words. The Sisters at Nativity have been so good to me. Since my mother’s death I have had to use my own judgment in many problems, although my father, my brothers and aunts have been kind to me. I really appreciate the help of the Sisters at Nativity. Yesterday two of them gave up their time to help me with my shopping. … You may be surprised to know that I have been in close contact with the young lady to whom you referred in your letter, Kathleen Tighe. … We attended two years of grammar school together. Kathleen is, I think, planning to visit her sisters on her way to Loretto. She and I will probably meet in St. Louis and travel together to Loretto from that point.

“I entered Loretto on Oct. 25, 1943, (although my brother had purchased my ticket so that I would arrive on Oct. 21 … to give me a few days to look around and decide if I wanted to stay. My father came for my Reception and was grateful for the blessing of my reception into the Community.”

With her Reception on April 25, 1944, Veronica became known as Sister Mary Thomas, a name she retained through her first 25 years of teaching. She was sent for a year to St. Vincent de Paul School in Denver and thence on a rotation among Loretto elementary school classrooms in Texas, New Mexico and Missouri, but mainly in California, where she served a total of 30 years, first at Immaculate Conception, Monrovia; three times at Divine Savior, Los Angeles; twice at Holy Name, Los Angeles; and twice at Blessed Sacrament, San Diego. In the summers she earned a bachelor’s degree at Loretto Heights College, Denver, and a master’s in counseling and guidance at Loyola University, Los Angeles.

Veronica wrote in 1981, “Having completed 33 years in the classroom, I moved into a new career — clinical pastoral ministry. Knowing that change is good for all, I accepted an invitation to spend some time at Loretto Motherhouse before entering this new work, and found the four and a half months there to be … a blessing for me in all ways, spiritually emotionally, mentally and physically. I enjoyed the work I did, chiefly being a driver. Living at Loretto reinvigorated me with a new outlook and deeper love for the Sisters of Loretto and each member of our Congregation.”

Through the 1980s, Veronica moved through a variety of positions, each a response to short-term opportunities. She went briefly to Calgary, Canada, to help Sister Cabrini Bartolo in the diocesan Pastoral Ministry Office, which included mingling with varieties of religious groups and denominations. She was a World Book representative in Southern California for two years and worked up to being an area manager. During this time she lived in an apartment. Then in 1984, wanting to return to a community living setting, she moved to El Paso, Texas, assuming the work of convent infirmarian. Two years later, at the age of 61, she took top marks in a certification program for nursing assistant, serving the El Paso community with these skills for another 15 years.

Veronica retired in 2002 to Loretto Motherhouse Infirmary, where she continued to satisfy her desire to “be of service and to help the Sisters.” She died peacefully on the 67th anniversary of her final vows as a Sister of Loretto. She once wrote, “I have liked each mission where I have lived and have been inspired by many of our Community.” Her prayer was ever “that I may give the best in me for whatever God chooses.” 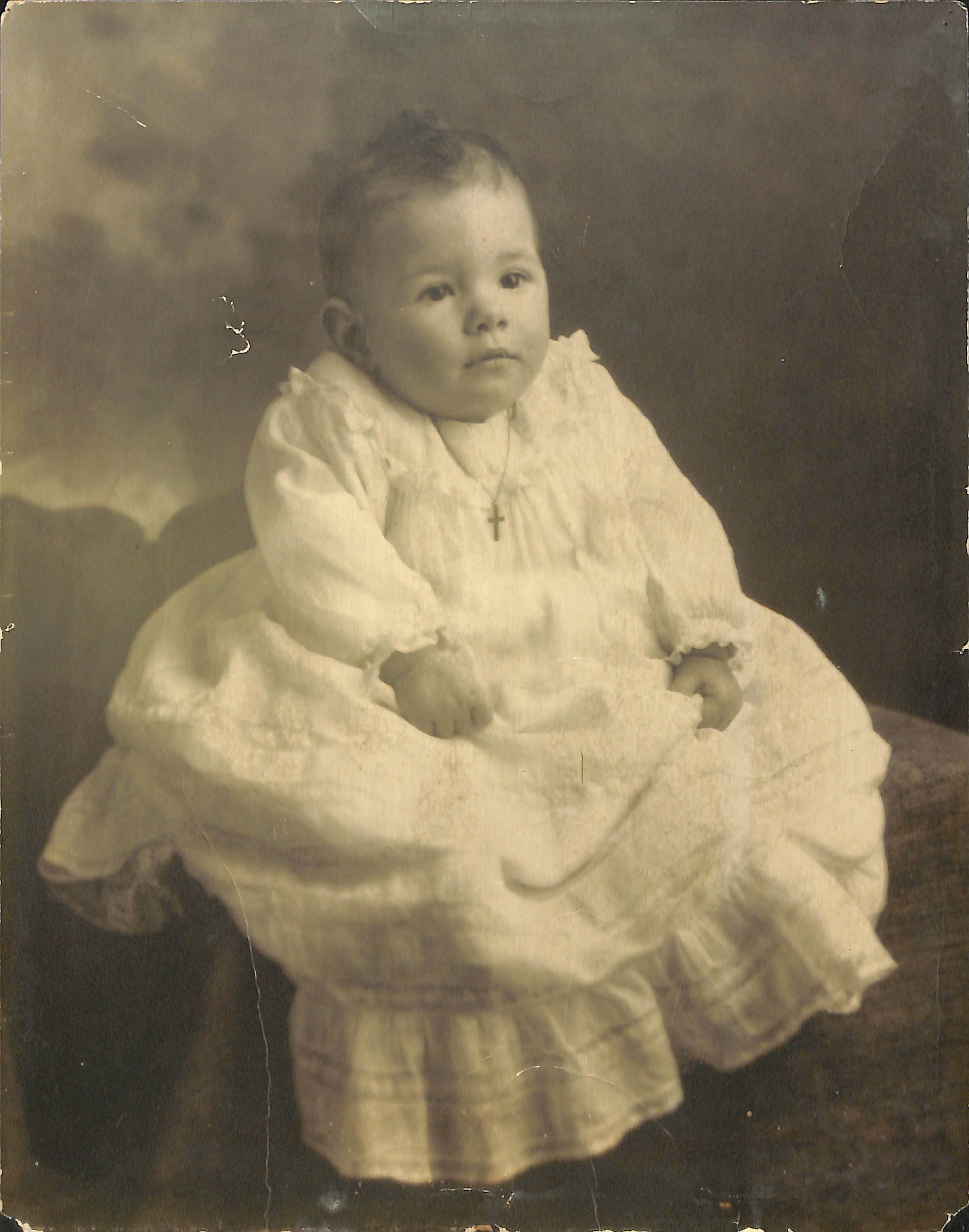 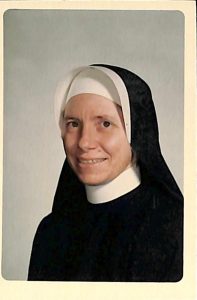 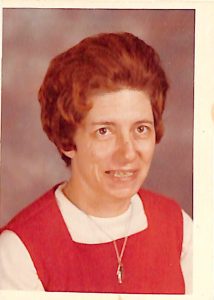 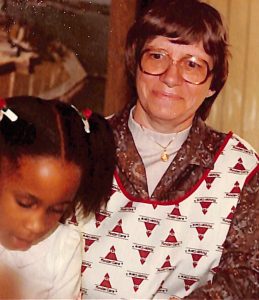 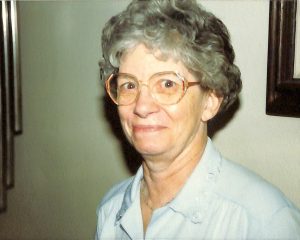 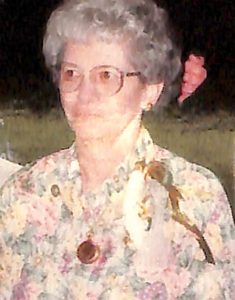 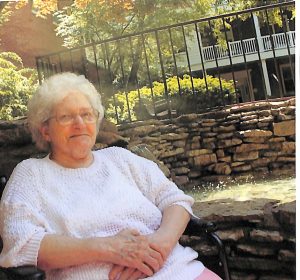 Veronica Marie at the Motherhouse 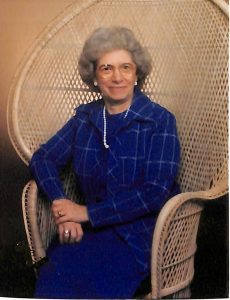 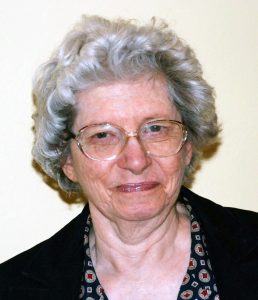