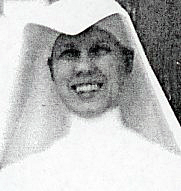 Rosemary Nicholson was born to James Thomas and Catherine Ann Brown Nicholson in 1922, in Catawissa, Mo., a small railroad community in Franklin County about 40 miles from St. Louis.  Rosemary was the couple’s middle child, following George and Kathleen and followed by Isabel and John.  There was also an oldest brother, Walter, from their father’s first marriage.

By the time Rosemary was school age, the family had moved to St. Augustine Parish on the near Northside of St. Louis, where Rosemary attended parochial school and where she was still living when she entered the Sisters of Loretto at the age of 29. Rosemary’s adolescence coincided with the Great Depression. Her records show she attended Beaumont Evening School for some years; but she seems to have joined the work force at a young age.  At the time of her application to Loretto, Rosemary was employed in a factory doing soldering.  When, as a young Sister of Loretto, Rosemary began college course work, she tested into college through the U.S. Air Force Institute GED program in El Paso, Texas.

Rosemary applied to the Mother General to enter the Loretto novitiate in May 1951.  Her older sister Kathleen was already a novice, Sister James Catherine, and her younger sister, Isabel, was hoping to join with Rosemary.  Isabel wrote to Mother Edwarda for both of them:  “For a long time Rosemary and I have been trying to get to the Novitiate.  At last we see our way through and are asking to be allowed to enter in June.”  Mother Edwarda replied, “It has been a long, long time since we received in one note two applications for admission to the Novitiate, so you may imagine what a thrill it gave us to get yours. … We are delighted beyond words over the prospect of welcoming you at Loretto and that you will have at least a year in the Novitiate with dear Sister James Catherine.  … Your dear Mother is heroic to make this triple sacrifice, but God cannot be outdone in generosity and He will bless her here as well as hereafter.”  Isabel replied, “Sister James Catherine knows about our coming.  She is going to carry our suitcases upstairs for us.”

Rosemary and Isabel were received into the Loretto Novitiate on Dec. 8, 1951. Rosemary became Sister Thomas Ann and Isabel was known as Sister John Ann until they changed their names sometime in the early 1970s. Then Rosemary resumed her baptismal name and generally was called Sister Mary.  Isabel shortened her religious name and was known as Sister Ann; Sister James Catherine returned to her baptismal name of Kathleen.  Many in the community knew them collectively as “the Nicholson Sisters,” noting their very close family ties.

Following first vows on Dec. 8, 1953, Rosemary was sent to St Mary’s, El Paso Texas, where she taught fourth and sixth grades for three years.  In the next 10 years she served in a series of Loretto-staffed parochial schools: St. Vincent’s in Cape Girardeau, Mo.; St. Patrick’s, East St. Louis, Ill.; Sacred Heart, St. Louis; Immaculate Conception, St. Louis; and St. Ferdinand, Florissant, Mo. Meanwhile, like so many Sisters, including her own siblings, Rosemary pursued the 20-year plan for earning her undergraduate degree, rotating during the summers among the Loretto collegiate programs in Denver, St. Louis and at the Motherhouse.  But change was breathing down her neck.

By 1967 the colleges no longer supported long-term, part-time approaches in their degree programs and the teacher certification requirements were about to change in Missouri.   Rosemary would have to go full time for a year or more to complete her bachelor’s degree.  With her two sisters, Rosemary accepted the invitation of their Provincial Superior, Sister Rose Maureen, to live in one of the small houses on the Webster College campus for the 1969-70 academic year.  We must suppose that there was considerable fanfare and family celebration when the three sisters completed their bachelors of arts degrees in the summer of 1970.

From Webster Groves the three sisters, with their new teaching certificates, moved to St. Paul the Apostle Parish in Pine Lawn, in North St. Louis County, where Rosemary taught the primary grades for 10 years.  She followed that with a year at Incarnate Word School, Chesterfield, Mo., and three years at the Loretto Learning Center in Webster Groves, Mo. Rosemary topped off her 37 years in the classroom with six years in the St. Louis Public Schools.  During much of this time, Rosemary lived with her sisters Ann and Kathleen in South St. Louis County; their household sometimes included their brother John as well.

In 1991 Rosemary retired from teaching, continuing to do community service in St. Louis. Rosemary, her sister Ann and their brother John retired to Country View Estates near Loretto Motherhouse in 1997 when their older sister Kathleen needed nursing care at Loretto Motherhouse Infirmary.  Their oldest brother, George, had recently died.  Soon after the move to Kentucky, Kathleen also died.  Sister Ann died in 2000 and Rosemary moved to the Motherhouse Community.  Their brother John died in 2008.

Rosemary was the final surviving sibling.  She left no autobiography and no photographs except one, a photo from December 1951, when she was received into the Sisters of Loretto.  In the picture, Rosemary stands proudly smiling with her mother, her two Sister-sisters, and their brother John.  No doubt she smiles still, having been privileged, in the company of her family, to complete the desire she expressed in her application to Loretto:  “To work for God.” 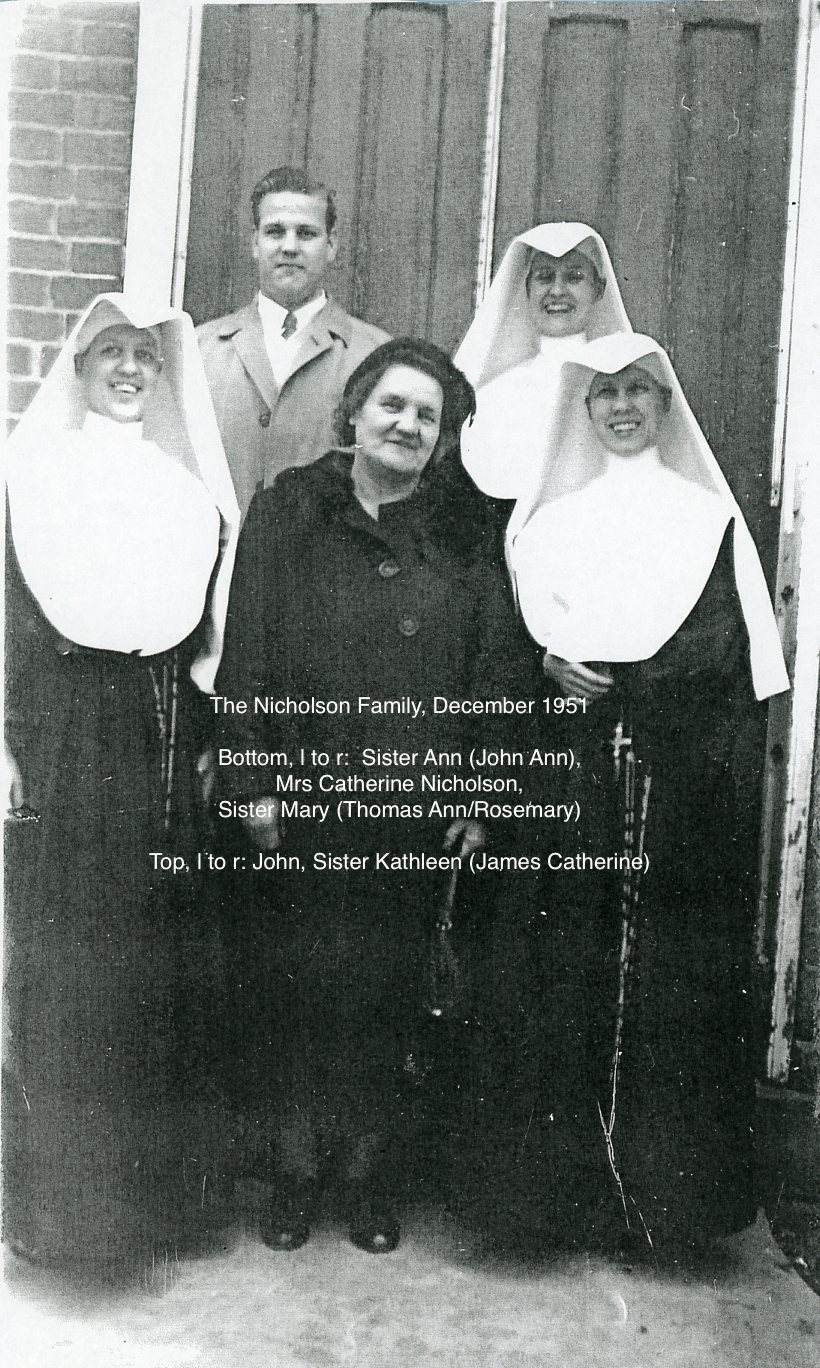