Remembrance of the Life of Lenore Carroll CoL 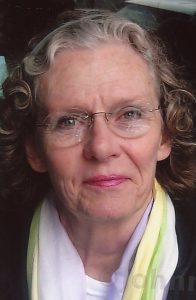 Lenore French Carroll was born in Kansas City, Mo., the daughter of Earl Leaton French and Bernice Smith French, who enrolled Lenore and her sister Cecilia in Catholic schools in Kansas City.

A pungent journalist, Lenore wrote an autobiography when she applied for Loretto Co-membership. In it she characterizes the ups and down of a modern woman’s life, beginning with her youthful interests while at St Vincent grade school and Lillis High School:

“My route home [from St. Vincent’s] went past the Jewish Community Center where I could check books out of a KCMO branch library. I ‘joined’ when I was 8 so I could learn to swim. … I continued to swim through high school and at Kansas City Junior College. I tried to swim other places where I lived, but I had to quit by the time my children came along. … In my 30s … I decided that nobody was going to take care of my body for me, so I needed to do it myself, … and I took time for myself to swim [again].

“I was an eager overachiever in grade school. The work wasn’t hard. … My sophomore year [I changed from St. Aloysius to Lillis High School and] spent a lot of energy figuring out how to be accepted and popular, the highest achievement of high school. … I was 5’10” when I was 13 and taller than most of the boys in my class. They called me ‘suckee,’ which was the Lillis version of brown nose. I resented that treatment; I intended to learn all I could.

‘The nuns thought going to Mount St. Scholastica College in Atchison. Kan., was the highest ambition thinkable for the few girls who went to college. I wanted to write, and the only Catholic college with a journalism degree was Marquette, which my parents couldn’t afford.” 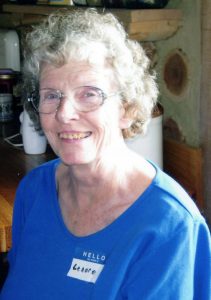 Lenore went instead to the local junior college, then transferred to the University of Missouri-Columbia Journalism School, where she formed lasting friendships with fellow students and with young faculty members. Bob Carroll, whom she had begun dating while in junior college, courted her with letters from the Army bases where he was stationed. They were married five days after Lenore’s graduation from Missouri U in 1960.

Lenore worked while Bob completed his service and then his undergraduate degree at Missouri U. They moved to New York where Bob got a job in White Plains and Lenore worked in Manhattan. “We stopped birth control but I didn’t get pregnant, so I went to a doctor and … had a lot of fancy surgery on my 26th birthday. Three months later, I was pregnant, and Michael, who refers to this as the miracle baby story, was born almost on my next birthday.”

The couple lived briefly in Evansville, Ind., where Bob worked and Lenore first experienced the role of stay-at-home parent as isolating and depressing. In just a few years, Bob took a job at the Kansas City (Mo.) Star; they returned to Kansas City, bought a house, and Lenore became pregnant again. Their son John was born in 1971 when Michael had just started first grade. Lenore wrote, “John was an easy baby and grew into an easy-going adult. I was too old and responsible to be a hippie but I envied their carefree ways.

“I already knew I wanted to do more than cook and wash diapers. I went back to school when John was a baby, and earned a master’s in guidance and counseling. I sent resumes to local colleges, thinking that if I taught, I would be on the same school schedule as my sons. … During the ’70s and ’80s, I reared sons, kept house, cooked, cleaned and did laundry, and also taught college classes at Longview Community College and the University of Missouri-Kansas City.

“When I was 40 I decided to get serious about writing, starting with the first Mark Twain Writers’ Conference at UMKC. After that I took writing classes as a ‘post graduate non-degree-seeking student,’ eventually joining a writers’ group. By this time I’d switched to teaching composition at UMKC. When the Bay Area Writing Project came along, I already had experience of how writers’ groups worked.”

Lenore and Bob divorced after 31 years of an increasingly unhappy marriage. Lenore wrote: “… A friend compared divorce after a long marriage to two trees whose roots have grown tangled. Pulling apart was the hardest thing I had done. I initiated the divorce, but I suffered and struggled afterward, working my way through all the psychological fallout from the divorce. 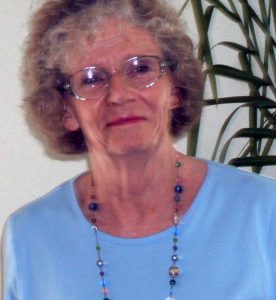 Lenore Carroll at her Co-membership celebration, Pentecost Sunday, May 23, 2010

“I had been worshiping with a group that met at the University’s Newman Center, later at Holy Family Catholic Worker House. I joined the Sufis. From the first night I walked into a dance meeting I knew it was for me — singing and dancing as worship was physical! Just what I responded to. … I continued as a Sufi, adopting prayer and meditation as spiritual exercise. [At the same time] I joined Our Lady of Sorrows Parish, becoming active in the services and programs. It was there I met Sister Mary McNellis and Pat Kenoyer and realized these women were good role models, showing me a positive way to age.”

At the urging of Mary McNellis, Lenore joined in the social gatherings of the Loretto Community in Kansas City and soon accepted Pat Kenoyer’s suggestion that she consider becoming a co-member. From 2003 to 2010, Lenore explored the meaning of co-membership with a series of contact persons and through several visits to the Motherhouse and other Loretto Community centers.

A series of health problems prolonged Lenore’s co-membership process but not her participation in the activities of the Kansas City Loretto Community, where she became a vital support in local peace and justice efforts and Loretto Community activities. She wrote the script for a movie celebrating the life of Sister Mary McNellis.

Lenore’s co-membership was finalized Feb. 28, 2010. When the Kansas City Lorettos celebrated her, Lenore expressed her satisfaction and gratitude that she could “spend time in a community of like-minded women for friendship and spirituality.” She hoped to be an active member for many years.

Very unexpectedly, Lenore Carroll died on May 28, 2016, just as she was to realize a long-held desire to move close to her two sons and her grandchildren in San Francisco. She was buried instead in her native Kansas City, close to her Loretto and Sufi communities.