Remembrance of the life of Marita Michenfelder Woodruff CoL 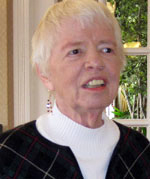 Marita Woodruff was the second of five children of Albert and Ruth Donahue Michenfelder. Baptized Ann Ruth, she attended elementary school at Our Holy Redeemer, just down the street from the family home. Ann graduated from Webster Groves High School and then from Webster College, both also very near the Michenfelder home. According to her sister, Mary Phelan, Marita loved theatre, “She used to give neighborhood plays, and she did theater all through high school and college.”

Following her graduation from Webster College in 1949 and with the advice of Sister Mary Louise Beutner, Ann applied for admission to the Sisters of Loretto. She wrote to Mother Edwarda about some hesitations she had had but concluded, “I can’t help but feel privileged, not only because God wants me, but also because God wants me to be a Sister of Loretto. I love the order so.”

Ann received the Loretto habit and the name Sister Marita on April 25, 1950. Although the records show that she intended to return to her baptismal name in 1968, she remained Marita through the rest of her life. Following first vows in 1952, she was missioned to Loretto Academy in Santa Fe and to Loretto Academy in Kansas City the next year. In 1957 Marita returned to St. Louis to stay, going briefly to De Andres High School but soon joining the faculty at Webster College. She completed a Master of Arts in Theatre at St. Louis University in 1959 and was appointed chair of Webster’s Theatre Arts Department. She played a leading role in the creation of the Loretto-Hilton Center for the Arts and what would become the Leigh Gerdine Conservatory of Performing Arts. It was the beginning of an era of dramatic growth in the College as a whole and the Theatre Department in particular, to which Marita contributed 40 years of endless creativity and energy.

In 1971, Marita wrote to Sister Helen Sanders, “It is with a heavy heart, but relatively peaceful mind that I write asking for permission to change my status in the Society from a canonical membership to that of co-membership. … Know that I can never not be a member of the Society. Its people, its goals, its vision are a part of my very soul.” Several months later, in her co-membership contract Marita wrote “I feel a definite responsibility to support the older Sisters and certain works. I want to strengthen the co-membership plan.”

Marita married Dr. Robert Woodruff in 1973. He died three years later. In the following nearly four decades Marita gave faithful love and gracious attention to both her Loretto and her Woodruff families. In 2007 Marita moved to Loretto Center in Webster Groves; in 2010 she went to Parc Provence Care Center where she died Monday February 17. A memorial service will be held at Webster University, at 1:30 p.m. on March 22, in the Winifred Moore Auditorium, which was Webster College Chapel when Marita was a student and a young Sister.

To view a video of the slideshow from Marita’s memorial, please click here.