Remembrance of the Life of Sister Ann White SL 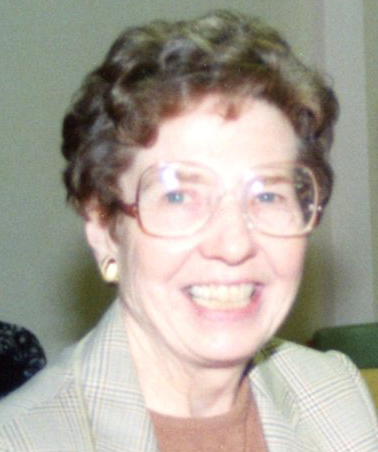 Born in Louisville, Kentucky, to Leo James and Mary Sonefeld White, the daughter who would become Sister Ann White was baptized Mary Inez. In an autobiographical sketch written in the late 1980s, Ann called herself “a first generation Kentuckian, since my parents were transferred to Louisville from Grand Rapids, Michigan.” Little Inez began elementary school at St. Vincent DePaul parish, but moved with her family after just one month to Louisville’s west end, where she was enrolled at Christ the King School even though her family lived outside the parish bounds. Following grade school Inez earned a scholarship to Loretto High School and then another to the Sisters of Charity’s Nazareth College (now Catherine Spalding.) After just one year of college, she asked to be admitted to the Sisters of Loretto. In a September, 1944, note to Reverend Mother Edwarda, written in the neat script that characterized all her later correspondence, Inez said, “I can’t tell you how happy I am that soon, with God’s Grace, I will be able to go to Loretto.”

On April 25, 1945, Inez received the habit of a Loretto novice and the name Sister Ann Richard, by which she would be known for more than 20 years. In the late 1960s she became simply Sister Ann White. After first vows, in April 1947, Ann was missioned to St. Pius V School in St. Louis, teaching first grade and working on her college degree on weekends at Webster College. She graduated from Webster with a major in French in August 1953 and was missioned to Bishop Toolen High School in Mobile, where she taught French, religion, and English for three years.

In September 1957, Ann was asked to do graduate studies in theology. Because Catholic universities in the United States would not admit women to full time graduate study of theology, Ann, together with Mary Frances Lottes, traveled to Rome to study at Regina Mundi, a graduate school of theology specifically established for women. Ann later wrote: “During three years’ stay in Rome, we had many opportunities for sightseeing in Rome and for travel in western Europe. We spent one summer at Oxford using the Bodleian Library and another in Louvain where we did a lot of research on Father Nerinckx—visiting the places important in his life and talking with his relatives. We were able to get microfilm of much of Father Nerinckx’ correspondence.” In June 1960 Ann was awarded the degree of Magisterium in Scientiis Sacris, the equivalent of a Doctorate in Theology. Following summer travels in the mid-East and Egypt, Ann returned to the States to teach theology at the Motherhouse Novitiate.

While Ann and Mary Fran were in Rome, Pope John XXIII was elected and, a year later, called for a Second Vatican Council. In 1965, Ann returned to Rome with Sister Mary Luke Tobin to attend the fourth session of the Council. She spoke later about the outstanding experiences of meeting great theologians and being included in all the activities with the Protestant observers. And she wrote, “During this period I used to dress in a black suit or a light blue suit. I wore a short veil and appeared frequently during the bishops’ coffee breaks, so that bishops might see what the ‘new nun’ would look like. I had to be very careful to avoid the press on these sorties because Newsweek and Time were eager for pictures of the ‘new nun’. I wore the suit and veil with Luke to visit Cardinal Antoniutti of the Sacred Congregation of Religion, who asked for photos!”

In 1963 Ann joined the Religion Department at Webster College and two years later was appointed chair. Following her return from Vatican II, she wrote, “we made the religion department very alive with the teachings of Vatican II. We even had classes for large numbers of adults who were eager to learn more about Vatican II and how it could affect and even change their lives. These were wonderfully alive times.” Ann taught theology at Webster until 1980, during which time she had many opportunities to travel, to work and to study with Catholic, Protestant and Jewish scholars. In the 1970s she traveled to the Holy Land on behalf of a Jewish group working for release of Soviet Jews.

In her autobiographical notes, Ann wrote: “My precious mother died suddenly in 1971. Between the time of her death and 1980, I spent all holidays with my darling father, times very precious for both of us.”

Ann’s international experience and language expertise led in 1980 to her appointment as Director of Webster University in Geneva, Switzerland, where she presided over a six-fold growth in enrollment, with students attending from 120 countries. Following six years at Webster in Geneva, Ann served as Administrative Director of the Art Center College of Design, also in Switzerland, and then as Dean of Administration for Schiller International University in Strasbourg, France.
Ann returned to the United States in 1992. She served as Executive Director for the National Association of Church Personnel Administrators, then as Administrator of the Motherhouse for the Dominican Sisters of St Catharine in Springfield, Kentucky. In 2001 Ann embarked on one final sabbatical, studying for a year at Berea College. She returned to Loretto Motherhouse where she taught exercise and shared her life-long love of dance. Annie Stevens remembers “Ann and Luke both loved to dance. In the summer of 2004 at the Motherhouse, Luke taught a basic ballet class for the seven of us in the Novitiate. Luke explained the foot positions, Ann demonstrated with music, and we all followed as best we could.”

Ann White retired to the Motherhouse Infirmary in 2005. She died peacefully on Sunday night, February 16, 2014.