Skip to content
Home » Obituaries » Remembrance of the Life of Virginia Vobejda, CoL

Remembrance of the Life of Virginia Vobejda, CoL

Posted on February 1, 2014, by Loretto Community 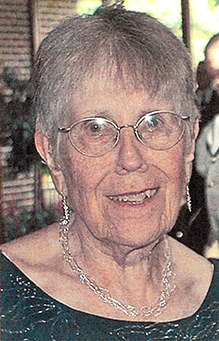 Virginia was born April 29, 1920 in Lodgepople, South Dakota. She and six siblings learned much growing up on their South Dakota farm. Their mother died when Virginia, the youngest child, was 13; but Virginia had been gifted with a depth of compassion and wisdom she took with her throughout her life.

Virginia married Bill Vobejda, a very talented engineer who worked at Martin-Marietta for many years. He had a part in the design for the first rocket to the moon! He and Virginia moved to Colorado and raised their five children—Bill, Margaret, Mary Jo, Barbara and Lori—in Englewood. Three of their daughters attended St. Mary’s Academy.
Virginia received a degree in Elementary Education from the University of Colorado and a Masters in Elementary Education/School Counseling from there also. She also obtained a certification in Family Therapy from the University of Denver.

After the children were raised, Virginia taught for 25 years and was the principal at St. Louis School in Englewood. She spent many years beginning in the late 1980s at the Conflict Center in Denver where she helped teach non-violent conflict and anger management to children, faculties, congregations, professional organizations and businesses. She was loved and respected by her coworkers and associates.

Virginia was a Deputy Probation Office in the 18th Judicial District for 11 years where she helped set up the Domestic Violence Unit. Virginia authored the last chapter of Elizabeth Loescher’s book How to Avoid World War III at Home.

In addition, Virginia was a Director of RCIA in St. Louis Parish beginning in the early 1990s. That is where she met Sister Marie Joann Rekart, and in 1996 she became a co-member of the Loretto Community. Her respect for the community was reflected in her Mutual Commitment: “I see, in those I know, the most Christian forward thinking. [Loretto members are] Christlike … as they go into the communities to teach and to help any who need help.” Virginia appreciated the strength and fearlessness of those “not afraid to act as their conscience dictates.” She lived a life reflecting the very values she saw in Loretto.

In 2005, when the large house in Englewood was empty – the children gone and Bill’s sudden death – Virginia moved to the Meridian in Englewood. There, she enjoyed her apartment, the meals prepared for her and the residents, and her many new friends. While living at the Meridian, Virginia suffered a mild heart attack just prior to her 93rd birthday. After a brief stay in the hospital, she went to the Heritage Club, a beautiful center for rehab and healing.

Marie Joann visited there just the week before Virginia began her new life with God – her mind clear, her body failing. She spoke of her readiness to move on, and Marie Joann assured her Bill was waiting to welcome her home. Virginia Vobejda died on Friday, January 31, 2014 in Englewood Colorado.