Posted on October 2, 2017, by Loretto Community 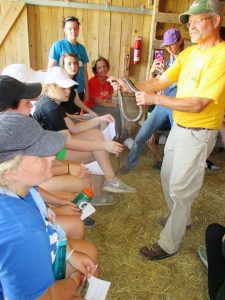 Bob Ernst, at far right holding a snake, operates Plowshares Farm Center for Education and Spirituality, a working farm as well as a community center. Plowshares was a recipient of a Special Needs Grant.
(Photo courtesy of Bob Ernst)

The Special Needs Fund, established by the General Assembly of 1973, has been active in promoting Loretto mission for 44 years. The Special Needs Fund has provided a combination of grant funds promoting social change and emergency funding to assist Loretto’s economically disadvantaged neighbors in times of crisis.

The 1973 Loretto General Assembly mandated the creation of a “fund for the disadvantaged.” The decision read in part: “… we begin this year to include in the Congregation’s operating budget an expenditure for the support of the disadvantaged, representing a certain percentage of our operating income. As a start for this fiscal year, one percent ($9,116) is suggested. An appropriate method of dispensing these monies will have to be devised.” The fund was soon known as the “1% Fund.”

The 1974 Assembly increased the amount for the disadvantaged to 2 percent of designated income, raising the amount available to $20,492. By 1978 the “1% Fund” became the “5% Fund” as successive Assemblies voted to increase the designated amount. In 1978 the fund disbursed $46,925, which represented 5 percent of the projected total income exclusive of Social Security income, contributions to the retirement trust, and medical and education funds. Gradually the term “Special Needs Fund” came into use. By 1983 the Special Needs Fund was 10 percent of designated income — $146,300. By January 1999 the amount designated for Special Needs stood at 13 percent or $212,160. 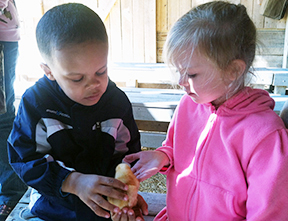 Two children pet a baby chick as they take part in one of Plowshares’ farm programs.
(Photo courtesy of Bob Ernst)

Over the years, both the General Assembly and the Special Needs Committee developed guidelines. In 1975 the split between the Social Change Grant Fund and the Emergency Fund was set at 75 percent/25 percent of the total amount allocated. The early committees were appointed by the Executive Committee and, per Assembly guidelines, included a chairperson, an Assembly member, the social advocate (a staff position) and volunteers to bring the number to five. Mary Ann McGivern chaired the first committee. Other members included Liz Dyer, Mary Mangan and Barb Roche. Barbara Light became the first co-member appointed to the committee in 2002. The committee now has five members — Ruth Routten, Martha Alderson, Angela Bianco, Janet Rabideau and Barbara Schulte —and a staff liaison. I now serve in that support position. 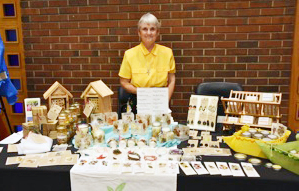 Since its inception grant funds have been awarded to organizations that share Loretto values and address areas of social change reflecting Community priorities. Early funded proposals reflected Loretto’s emerging awareness of the rights and needs of women and children. The 1980s saw an increasing response to the needs of refugees fleeing repressive Central American countries. In 1980 the General Assembly voted to allocate $10,000 from Special Needs Funds for emergency relief for the people of El Salvador. The following year $23,500 was allocated from Special Needs for Central American refugees. Concern for refugees has continued to be a focus of the fund. Loretto also has responded to its concerns about the needs of migrant workers, persons experiencing homelessness, child care, women, education, health care, disarmament, abolition of the death penalty, youth, leadership and the environment, granting Special Needs Funds to organizations committed to these works. Loretto has also responded to natural disasters around the United States and the world. Grants have focused Loretto mission globally: to our Central and South American neighbors, to the many peoples of Africa, to projects in Pakistan, Lithuania, France, Vietnam, Syria, Turkey and Iraq. 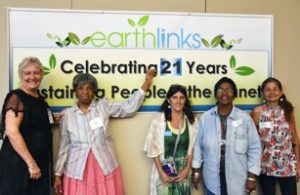 Above are some Earthlinks clients who participate in the program making items from flowers they grow and dry.
(Photo by Ruth Routten)

The Special Needs Committee responds to emergency requests made by Loretto Community members throughout the year. Requests directly from persons in need are not accepted. The committee may elect to allocate funds in response to local disasters such as tornados, hurricanes and earthquakes. Generally, emergency requests are limited to amounts up to $500 but in special circumstances and with the approval of the entire committee up to $2,000 may be allocated. Grant proposals for amounts up to $7,500 are accepted each year by Oct. 15 and Feb. 15. They require a letter of support from a Loretto Community member who is familiar with the project and knows the organization. A report on the use of funding must be submitted within a year for an organization to be eligible for future funding.