Posted on September 1, 2017, by Loretto Community 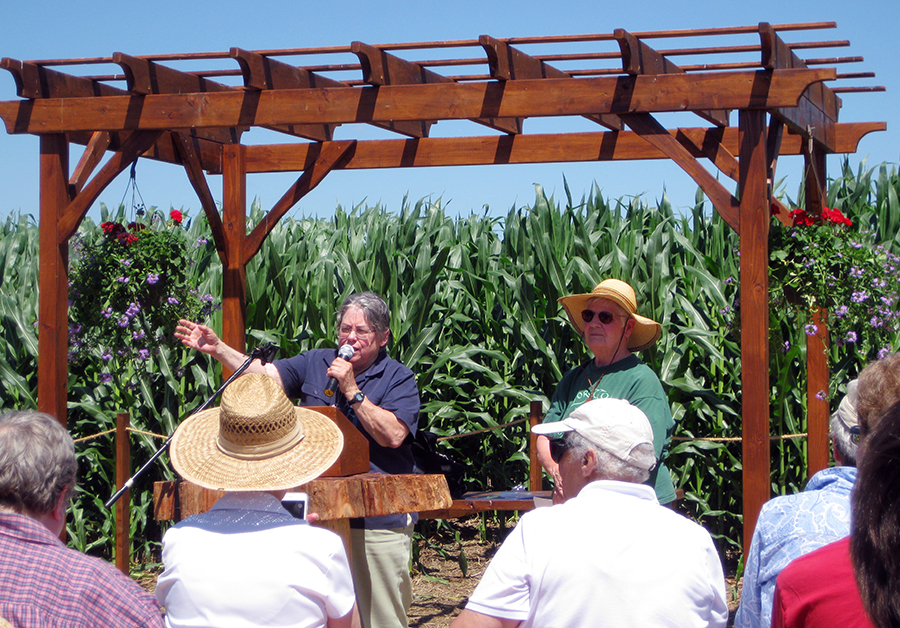 Google “anti-fracking nuns” and a marvelous YouTube video will appear featuring 21 women from Loretto singing “Amazing Grace.” It is almost legend how we stopped Williams Co. from building the proposed Bluegrass Pipeline through Loretto land but it took a tremendous amount of coalition building with our neighbors and allies. Now Williams is threatening to use eminent domain to seize farmland belonging to the Adorers of the Blood of Christ in Lancaster, Pa., for the proposed Atlantic Sunrise Pipeline.

In late June Maria Visse received an email plea from Tim Spiese of Lancaster Against Pipelines (LAP). He revealed a creative nonviolent response to Williams: the Adorers and their LAP allies would build an outdoor chapel on the land. The Adorers were calling for others to come and dedicate the chapel.

Tim wrote, “We would be honored if some sisters from your community would attend on July 9. This is not a token invitation. We could really use your help. The very idea of Williams running into those same Kentucky nuns arm-in-arm with our nuns warms our hearts. I know this is a lot to ask.”

A lot to ask, but Pauline Albin said, “We HAD to be here!”

A lovely wooden pergola structure was quickly built in the cornfield, and benches were set in place for worshipers to come gather for the dedication of the chapel. A tall tree stump became an ambo, two suspended flower baskets bordered the chapel with color.

Word spread among neighbors and allies and soon women from Loretto were making plans to caravan by car to Lancaster. Meanwhile, word went out to other members of the Loretto Community who might be geographically connected to the proposed pipeline. I, living in Harrisonburg, Va., shared the invitation with Earl Martin, asking him about his Mennonite roots in Lancaster. Earl responded, “Indeed I have family in Lancaster County. That’s home to nine generations of Martins!”

Quickly a coalition of people from Harrisonburg organized a van to make the trek to Lancaster. We stopped on the way to the chapel to visit a farm owned by an Amish family where Williams claims the right to dig under the river to lay pipeline. Activists who had been at Standing Rock already had formed a camp at the site, ready to commit civil disobedience against Williams if necessary to protect the land. 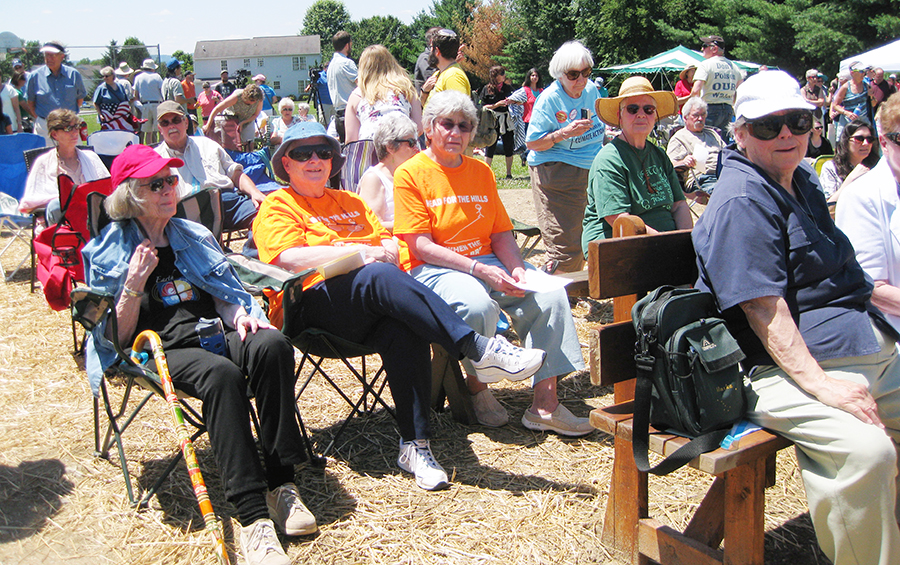 Above, from left, Marian McAvoy, Nancy Wittwer, Angela Bianco, Eleanor Craig and Maria Visse were among those who attended the chapel dedication.
(Photo by Donna Mattingly)

On the day of the chapel dedication an enthusiastic group from Loretto joined the Adorers in the “pews” among the corn: Maria Visse, Pauline Albin, Eleanor Craig, Nancy Wittwer, Angela Bianco, Marian McAvoy and Donna Mattingly. Some wore our green shirts with “Loretto Community: We Work for Justice and Act for Peace.”

Fifty feet of colorful quilts handmade by local anti-pipeline groups decorated the fences leading up to the chapel, adding a sense of festivity. Everyone received a satin ribbon as she or he entered the chapel. The interfaith dedication began with a blessing from Sister Janet McCann of the Adorers (see her text here). The congregation stood to bless the land. We sang “Amazing Grace” and listened to remarks from Maria Visse. “Numbers of informed friends, neighbors and fellow churchgoers need to be a part of a public outcry about the destructive nature of the fossil fuel industry. This is a long-haul journey.” She encouraged friends, allies and activists to form a strong coalition with the sisters. “Thanks for joining the Adorers in their attempt to stand tall for dear Mother Earth.”

Marian remarked, “I’m going to be 90 years old this week. This is a great way to celebrate!” She then joined others at the close of the dedication to tie her satin ribbon on the ropes around the space that delineated the chapel. Wendell Berry’s words came to life: “There are no unsacred places, only sacred places and desecrated places.”

July 14 the Adorers filed a civil rights lawsuit against the Federal Environmental Regulatory Commission. The suit alleges that a fracked gas pipeline through their farmland violates their long-demonstrated religious commitment to environmental justice.

The outdoor chapel is now open to the public for prayer, song, meditation and silence. Contact [email protected] to let her know if you or a group might be coming to the chapel.

Editor’s note: See “How Standing Rock Became a Spiritual Pilgrimage for Activists” in America magazine, June 14, https://www.americamagazine.org/faith/2017/06/14/how-standing-rock-became-spiritual-pilgrimage-activists to read a fuller report of the work of water protectors around the United States.