Posted on September 6, 2017, by Loretto Community 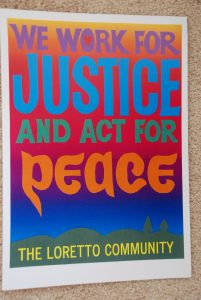 The Loretto Community is deeply disappointed and angered by the decision of the Trump administration to suspend the DACA Executive Order and break our nation’s promise to 800,000 young Dreamers. Loretto urges congressional passage of the bi-partisan DREAM Act, which would convert DACA – the Deferred Action for Childhood Arrivals Executive Order, issued by President Obama and yesterday suspended by the Trump administration – into federal law.

The Dreamers are young people brought as children to the United States by their undocumented immigrant parents. They have grown up in the United States, serve in the U.S. military, attend our finest colleges and universities and have distinguished themselves as good neighbors and members of our communities. With DACA’s promise of gaining lawful status in the United States, more than 800,000 Dreamers applied for DACA, providing the U.S. government with all of their personal information. The withdrawal of DACA not only breaks that promise, but makes the Dreamers easy targets for deportation because ICE now knows who they are, and where they live, work and attend school.

“The withdrawal of DACA is a mean-spirited betrayal of our nation’s promise to the Dreamers. This betrayal fills us with sorrow and anger, but also the resolve to work tirelessly until Congress passes the bi-partisan DREAM Act,” said Loretto President Sister Pearl McGivney SL. “Our message to the Dreamers is that Loretto stands with you, we will protect you, and we are dedicated to making good America’s promise to you.”