Remembrance of the Life of Margaret Drury CoL 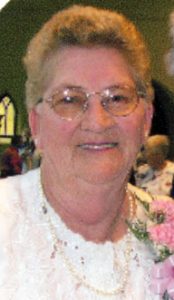 Margaret Cotillion Powell was born at home in Loretto, Ky. Margaret’s father Robert Powell was killed at the railroad tracks in Loretto before she was born. Her mother, Jane Elizabeth Miles Powell raised Margaret and her eight brothers and sisters through the very difficult years of the depression. Margaret began working at a very young age, missing the opportunity to go to school. She worked at Loretto Distillery and in several people’s homes before marrying Joseph Henry Drury on April 26, 1947.

Margaret and Henry moved into a house on the Manton Road; later they built a new home with their own hands. In 2007 they celebrated their 60th wedding anniversary at Holy Rosary Church in Manton. They had four children, Ronnie who was killed in a tragic accident, Joyce, Billy and Timmy. At the time of her death, Margaret had seven grandchildren and two great-grandchildren.

Margaret worked at the Loretto Motherhouse from 1962 until she retired in 1989. Sienna Jansing SL, the first director of the Infirmary, originally hired Margaret for just three weeks to help with cleaning in the Infirmary. Margaret stayed for 27 years. She worked in housekeeping in the Infirmary with Rita Ryan SL and cleaned the Guest House with Parmena Young SL. Soon she was transferred full time to the laundry with Guadalupe Vasquez SL. When Sister Guadalupe moved to a new mission, Margaret became the supervisor of the big laundry, a job she held until her retirement in 1989.

Margaret belonged to the Altar Society and was a very active member of Holy Rosary Church, Manton. For many years she attended Mass at Loretto Motherhouse nearly every morning. She said, “I feel at home here at Loretto.” Margaret volunteered to make dozens of clothes protectors for the Motherhouse Infirmary residents. Margaret and Sister Albin House shared an avid love of quilting. Margaret made dozens of quilts in her lifetime. Just two weeks before she died, Margaret helped Kay Carlew SL gather together the sewing materials Kay would need to begin making quilts.

Sisters Marie Lourde Steckler and Kay Carlew accompanied Margaret in her journey to co-membership in 1979. They would gather with Margaret at the Drury home to read and discuss I Am the Way. Henry joined in all these meetings; he wanted to understand what it meant for Margaret to be a co-member of Loretto. In expressing her desire to be a Co-member, Margaret said, “I want to help other people the way the sisters do.” In the end, after helping so many people, Margaret made her home at the Motherhouse Infirmary, where she died surrounded by her family and her Loretto Sisters.