Remembrance of the Life of Carol Durphy SL 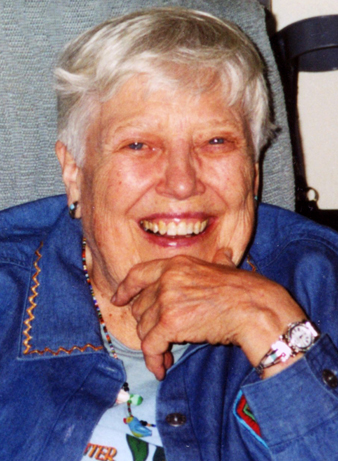 Carol Mae Dunphy was born in Eastlake, Colo., the first of four children of Arthur John and Edith Louise Molholm Dunphy, both Colorado natives. Her sister Lois was born a year later, then Arthur Lynn and Phyllis followed. “We grew up on the farm that belonged to our Danish grandparents…. It was not a large farm but had an irrigation pond where we swam in the summer and skated in the winter. I followed my father around and learned to milk a cow and drive the horses and the tractor that pulled up the haystacker.”

Carol attended the two-room schoolhouse at Broomfield, Colo., for her first eight years. Since the district had no high school, the district paid Carol’s tuition to Holy Family High School in northwest Denver where the Sisters of Loretto taught. Carol already knew Loretto from catechism classes in her small town. Graduating from high school in 1940, Carol went on to two years of business college, then gained secretarial experience in a law office. By then the Second World War was underway and the WAVES was just being organized as a division of the U.S. Navy. Carol joined the WAVES in October 1943 and later wrote about her experiences:

“I spent three months in training at Hunter College, New York, and at Iowa State Teachers’ College. I was sent to Yeoman school where we learned the navy’s system of correspondence. I did clerical work in a communications office in San Francisco for a year (1944) and then did the same type of work in Pearl Harbor for about nine months, at which time I was discharged, (December 1945). I enjoyed the experiences I had in the service very much and have never regretted the time I spent in it. We had joined to serve until the end of the war. I was tempted to sign up permanently but decided to use the GI Bill, get a college degree, get a job and buy a car. I attended Webster College through my junior year and then entered the Sisters of Loretto. I did get my degree but never bought a car. When we changed the veil in 1953, however, I was one of the first to get a driver’s license.”

In her third year at Webster, January 1949, Carol consulted with Sister Edwin Mary and with her family, then wrote to Reverend Mother Edwarda, “I have decided that I should like very much to put in my application for Loretto. I have spoken to my family and they agree that if it is what I want to do I should go as soon as I can.”

Carol was received into the Sisters of Loretto Dec. 8, 1949, alongside Marian Andrews and Webster classmate Elizabeth Ann Compton; both would be her close friends for 65 years of religious life. Carol’s younger sister, Lois, had entered the novitiate in 1941, receiving the religious name Sister Mary Carol on April 25, 1942, so Carol became Sister Peter Michael, a name she used until 1966.

Carol made her final vows Aug. 15, 1955. Two years later, according to the “bull” in Carol’s file, she was transferred from Nerinx Hall to Loretto Heights College, where she had a light teaching schedule and full responsibility for the freshmen and sophomores in St. Joe’s dormitory. In 1959, she was changed again and in 1960 she volunteered to go to South America. Later she wrote: “I like to say I had a good reason and a real reason for volunteering to go to South America. I can’t explain the real reason too well…I had a strong feeling I should volunteer. I knew I was a bit over the age suggested but I had been teaching Spanish… It was almost like the call to my vocation. My good reason was that I had received my Masters in English in July 1959 and was assigned to be principal and superior at Bishop Toolen High. In order to be principal in Alabama, I still needed six hours each of Chemistry, Biology and Social Studies. Who wouldn’t volunteer for South America?”

Carol’s companions in establishing Loretto’s first mission in South America were Sisters Eva Marie Salas and Mary Peter Bruce, both bilingual in Spanish and English. Carol strengthened her Spanish by going to Puerto Rico in the summer of 1960 to Monsignor Ivan Illich’s course of preparation for missionaries from the U.S. heading for South America. The three sisters left from New Orleans on the steamship Gulf Farmer in early October; the receipt for Carol’s $365 fare is in her personnel folder. They passed through the Panama Canal and disembarked in Arica, Chile. On Nov. 3, 1960, they arrived at La Paz, Bolivia, and in February of 1961 opened Colegio Loreto. Carol’s first task was directing the building rennovations. “My teaching experience had prepared me with grammar but not vocabulary, so I did a lot of pointing in hardware stores and got along pretty well with plumbers, electricians and carpenters.”

In 1967, feeling she had done what she could in Bolivia, Carol returned to the States to teach at Loretto High School, (Broadway) in Louisville. She assumed the position of principal in 1971, at a time of stressful transition in the student body and in race relations in Louisville and the nation. Carol’s files include a monograph she wrote for the Kentucky Education Department describing a staff development process she initiated to help Broadway faculty find positive directions for the school. Sadly, two years later Carol presided over Broadway’s closing and the sale of the property.

Carol returned to her earlier secretarial career, first as administrative assistant to the president of the Senate of Religious in Louisville. In 1975 she moved to Denver to work in a program of Catholic Charities for the resettlement of Vietnamese refugees and as secretary to Sister Loretto Anne Madden with the Colorado Social Legislation Committee. In 1980 Carol became a member of the Loretto staff, serving two years as Social Advocate and then devoting twenty years as administrative assistant to three Loretto presidents—Marian McAvoy, Maureen McCormack and Mary Ann Coyle. All three recall Carol’s efficiency, competence, vast knowledge of events and schedules, eye for detail, but mostly they recall her generous disposition, unfailing good humor, and the way she would laugh about the three presidents’ very different work styles. Marian McAvoy said “We were each so grateful for Carol, and the community should be too.”

Among Carol’s papers, several short autobiographies and letters from South America attest to Carol’s lifetime of service to country and community. Less tangible but no less significant, the happy school memories of hundreds of high school and college students and the gratitude of three presidents resound to her memory. Underlying all these public contributions are tender friendships and close family ties which testify to Carol’s loving and generous spirit.

The Loretto community is indeed very grateful for Carol Dunphy and for the more than 65 years of life she shared with us.