Remembrance of the Life of Sister Charlotte Marie Schwartz SL 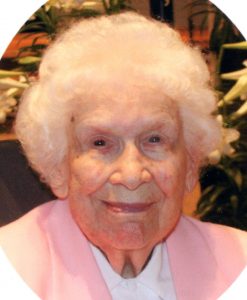 She was born in St. Louis in 1911 and baptized Mary Melinda, after her maternal grandmother. She began elementary school in 1917 at St. James Parochial School in the city, but soon transferred to Immaculate Conception Parochial School in Maplewood where her Loretto education began. Her eighth grade teacher at IC, Sister Fredric Glassmeyer, first gave her the idea of joining the Sisters of Loretto. Charlotte went to Nerinx Hall High School, beginning in 1925, just one year after the school opened in the “White House”. Many years later she told an interviewer, “I met Sister Marie Clyde Murphy there, a wonderful teacher, who furthered my desire to give my life to Christ.”

In 1929, Charlotte enrolled at Webster College, graduating with a Bachelor’s degree in English and history four years later. She pursued another year of schooling in shorthand and typing and then wrote to Loretto, “Dear Reverend Mother, After some five or six years of pondering, I’ve decided that if God wills and you see fit to accept me, I’d very much like to try myself out at the novitiate. Charlotte arrived in June 1934, on the heels of a good pal from Nerinx and Webster, Mary Casey who had just been received as Sister Ellen Patricia. Mother Philomene was their Novice Mistress: “She dealt with us as adults. I was 23 and so I really appreciated that. I found the novitiate delightful. Maybe I missed something, but I just loved it. Melinda Schwartz was received into the Loretto community as Sister Charlotte Marie on Dec. 8, 1934, making her first vows on the same date two years later and her final vows August 15, 1940.

Charlotte’s first assignment, while a second year novice, was to teach 60 primary grade children at what the records call the “Depot School” at Loretto, Ky. Having no training as a teacher, she found the classroom work difficult but retained pleasant memories of the children. Following first vows, Charlotte was assigned to the high school department of St. Mary’s in Colorado Springs. Again it was difficult. Later Charlotte put into words the experience of many young Loretto teachers of that era: “I couldn’t handle the children; I had no idea of how to teach nor of discipline in the classroom nor classroom management. Plus the school was co-ed and I wasn’t used to boys at all. (Others on the faculty tried to help but) we really didn’t have time. It was hard.”

After a year and a half, Charlotte was transferred to Loretto Academy (Broadway) in Louisville. “It was a little easier. They were all girls and smaller classes, but it was difficult in other ways. We had operettas and I had to teach singing, choral work and piano. I also taught geography in the grade school.” Among Charlotte Marie’s students at Broadway were future Loretto Sisters Pat Hummel, Mary Jane Richardson, Mary Agnes Mahoney and Betty Riggs. One of these described Charlotte in the classroom: “She never lost her composure, never raised her voice. She was always calm, even when admonishing someone. She was a gentle person.”

Loretto’s 1968 decision to no longer assign sisters to schools gave Charlotte the opportunity to do something besides teach. She enrolled in a master’s degree program in library science at the University of Indiana in Bloomington. In 1971 she began working as a librarian in the Louisville public school system, first at Parkland Junior High and then at Central High, both with large African-American student bodies. These were exciting yet difficult years when the Louisville community was working on integrating the schools. Charlotte Marie described this period as one in which she was glad to receive a professional salary for work she liked to do. She was also becoming adjusted to living in an apartment by herself while fully participating in the activities of the Loretto Sisters in Louisville.

In 1977 Charlotte Marie moved to Denver working first for the Archdiocesan Pastoral Center, then briefly for the Loretto staff, as a clerk at St. Mary’s Academy, and as a driver for Loretto sisters. In the mid-1980s she went to El Paso as a volunteer driver for five years, retiring back to Denver in 1988.

Those who knew Charlotte Marie in her retirement years, in her Denver apartment, at the Denver Center and, after 2009, at Loretto Motherhouse were struck by her good humor, her love of reading and her sense of adventure. At the age of 101, she was Grand Marshal of the first Christmas Parade of the Kentucky town of Loretto, near the Loretto Motherhouse. The parade, which ran the length of the town, had 68 entries. When Charlotte Marie was asked about her experience riding aboard Loretto’s flat-bed float pulled by a tractor, she said, “It was cold, but if asked, I’d like to do it again next year.”

Charlotte Marie was close to celebrating her 104 birthday when she died peacefully at Loretto Motherhouse in her 81st year as a Sister of Loretto.