Remembrance of the Life of Sister M. Barbara Croghan SL 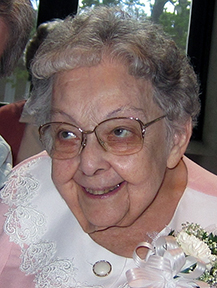 Sister Mary Barbara Croghan was born in Denver, the first of three children of John and Barbara Stroh Croghan. Baptized Dorothy Ellen, she took her mother’s and her younger sister’s names when she was received in Loretto, being known as Sister Barbara Marion from 1935 to 1952, at which time the elderly Sister Barbara Everin died and Barbara simplified her name.

Barbara’s family moved from Colorado when she was little more than one year old and she has always claimed California as her home. She attended Holy Name School for five years under the Sisters of Loretto. She was much impressed and influenced by her two principals, Sisters Pachomia and Alexander. In her autobiography Barbara wrote that many times during her years at Holy Name she noted the happiness of the sisters and, like so many before and since, she said their happiness was the reason she desired to enter religious life.

Barbara applied to enter the Novitiate when she was just 15 years old. She wrote to Reverend Mother General, “I have never wanted to be a teacher but I greatly desire to go to foreign missions.” Two of the postulants in Barbara’s class were from Loretto in China; this was as close as she got to the foreign missions.

Despite her early preferences, Barbara taught for 30 years, beginning at Blessed Sacrament in Denver; continuing at Douglas, Ariz.; Divine Savior in Los Angeles; St. James in Highwood, Ill.; and St. Joseph in Rawlins, Wyo. Except for an interim time at All Souls in Denver, Barbara taught the remainder of her years in Illinois at Rock Falls, Highland Park and Sterling. In 1971, she asked to return to the Center in Denver, hoping that she would no longer have to teach. At various times from 1971 to 1990 she tutored at Rhodes Tutoring Center, had charge of the Loretto Center dining room, the payroll for employees, and the kitchen. She also coordinated the liturgy, which she found the most rewarding and enjoyable. Barbara’s personnel file contains a Certificate of Merit from Arapahoe County Colorado, for her service as a commodity distribution volunteer in the mid 1980s. She was a member of Church Women United, serving as the local Denver Treasurer and receiving their Valiant Woman Award.

Barbara retired to Loretto Motherhouse in 1990, pleased to return to the place where she had been so happy as a young novice. She continued her service to the community, serving as receptionist and giving many volunteer hours preparing fresh vegetables and luscious sweets in the “yellow kitchen.” She joined other Loretto members protesting the production of nuclear weapons at Oak Ridge, Tennessee; a newspaper photo of her at the Pilgrimage for Peace is in her file, along with photos of earlier peace demonstrations she attended in Denver.

Barbara was widely known for her keen sense of hospitality and good humor. At the Motherhouse she frequently welcomed retreatants and visitors to join her at table in the dining room. One visitor wrote that Barbara’s infectious laughter and her abiding sense of service deepened their understanding of community. In November 2010 when the Apostolic Visitators arrived at the Motherhouse, Barbara’s good-humored fun brought them into the spirit of Loretto and helped everyone relax and extend a sisterly welcome. Barbara has given us all an enduring example of the happiness she had admired in her Loretto teachers in Los Angeles.