Remembrance of the Life of Sister Carolyn Ann Wheat SL

Posted on January 5, 2017, by Loretto Community 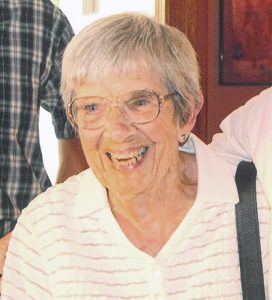 Sister Carolyn Ann, who was baptized Anna Sophia, was a daughter of Kentucky who spent almost her entire adult life in the western United States. Her mother, Georgia Regina Thompson, was a descendant of the pioneering Cambron family of the Kentucky “Holy Land.” Little Anna Sophie was named for her maternal grandmother, Sophie Regina Cambron. Anna Sophie’s father, Charles Nathaniel Wheat, was born in Glendale, Ky., and converted to Catholicism about the time her older sister, Mary Louise, was born.

Anna Sophie was the second in a family of nine children, all born in in the Portland area of Louisville, Ky., where their parents had married and settled in 1919. Anna Sophie attended St. Cecilia parochial school and then nearby St. Anthony School. She attended public high school, then one year at Loretto High School on Broadway. It was the height of the depression and she interrupted her education to work as a sales clerk. In a letter of application to Loretto, dated July 25, 1939, Anna Sophie wrote:

“Dear Sister, I have been thinking a few years of entering the convent and have now decided it is my vocation. I am eighteen years old, have had two years [high school] and have been working two years. I am a niece of Loretto Sister Corinne Cambron and belong to St. Anthony’s Church, Louisville. Kindly answer on how to go about entering the convent.”

Three months later, Oct. 25, 1939, Anna Sophie arrived at Loretto, one of a class of 12. She was received into the novitiate April 25, 1940, taking the name Sister Carolyn Ann, by which she has been known throughout her religious life. Two years later, Sister Carolyn Ann made her first vows, and on Aug. 15, 1945, she professed final vows. In 1990, nine of the original 12 celebrated their golden jubilee together.

In January of 1943, Carolyn Ann began her 67-year career in elementary school classrooms, mostly in the west: Texas, California, Colorado and New Mexico. Like so many young sisters, Carolyn Ann spent many years working on her own schooling. While still in the novitiate, she had resumed her high school education. She had remained at the Motherhouse after first vows for further classes, then was sent to St. Ignatius Grade School in El Paso, Texas, to observe teaching methods.

Carolyn Ann began teaching grade school students at Guardian Angel in El Paso, where she served for four years. During that time she completed her high school education and was awarded her high school diploma through Loretto Academy in El Paso. In 1947 she went to Holy Name School, in Los Angeles, where besides teaching grade school full time, she began studying for her bachelor’s degree at Mount St. Mary’s College. In 1951 she was transferred to St. Philomena Grade School in Denver, taking up her degree studies at Loretto Heights College, from which she received her bachelor’s, majoring in history, in August 1957.

Carolyn Ann’s years of simultaneous teaching and studying continued for a total of 20 years. For her master’s degree in education she studied at St. Louis University, completing the master’s in 1966 at the end of her brief six years in the Midwest as teacher and superior at St. Vincent School in Cape Girardeau, Mo.

“At St. John’s Grade School in Denver, Carolyn Ann spearheaded an ungraded program that enabled primary and upper-grade students to work at their individual ability levels. Her ministry in teaching continued for three decades in the archdioceses of Santa Fe, N.M. In the early 1980s, she participated in peace pilgrimages to Los Alamos, site of the nuclear bomb development in New Mexico.

“After retiring from full-time teaching, Carolyn Ann was invited to tutor ninth-grade math students at St. Pius V High School in Albuquerque, N.M. From 2010 to 2013, she helped the local Meals on Wheels program by delivering ‘hot lunches and smiles’ to homebound residents in the south Rio Grand valley.”

For nearly 40 years in New Mexico, Carolyn Ann and Sue Charmley became widely known in Loretto circles for their outdoor adventures, particularly their frequent offers to guide Loretto members on hikes into the Grand Canyon. With other Loretto members in New Mexico, Sue and Carolyn Ann shared in the rich spiritual and intellectual offerings of Richard Rohr’s Center for Action and Contemplation. They worshipped at the University of New Mexico’s University Chapel, and participated in the stimulation of scripture and spirituality studies with the Dominican priests at the Aquinas Center. They often gathered with other Loretto members in southern New Mexico and were active members of Community Group 3, known as “the Taos Group” even after its meetings moved to Denver.

There is a letter in Carolyn Ann’s personnel file addressed to the New Mexico Department of Education. In it, Carolyn Ann summarizes her educational career and philosophy. The letter accompanied Carolyn Ann’s 1994 application to participate in New Mexico’s Earth Shuttle Program, an opportunity for her to take the under-served eighth-graders from Queen of Heaven School, Albuquerque, on an educational trip to Cape Canaveral and Epcot Center in Florida. In her letter, Carolyn Ann describes herself:

“I am interested in applying for the Earth Shuttle Program because my philosophy of education is grounded in the belief that educated, caring and empowered young people are essential to our future. It excites me when students are offered the opportunity to develop their talents and they come to know the world as a place where hope may live. … I am committed to continue seeking opportunities for myself so that I in turn can share the most of who I am with those whom I teach.”

Through her long life of service in education, Sister Carolyn Ann has blessed both her students and our Loretto Community, helping all of us know the world as a place where hope may live. 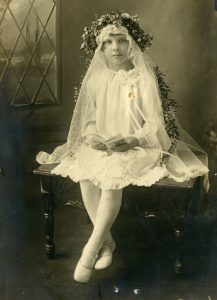 Carolyn on her First Communion 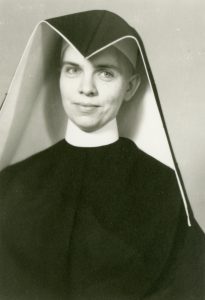 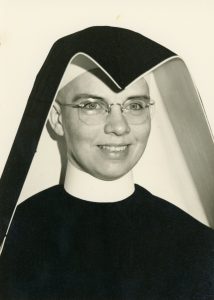 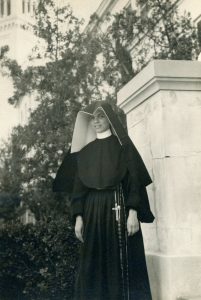 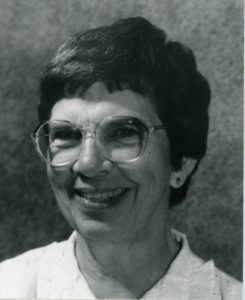 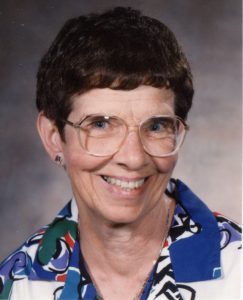 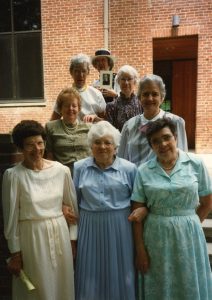 Carolyn Ann Wheat on her jubilee 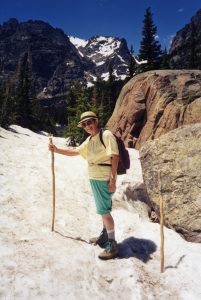 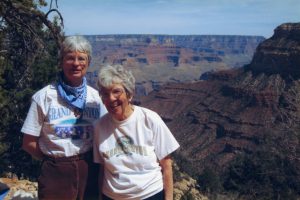 Carolyn and Sue Charmley in the Grand Canyon 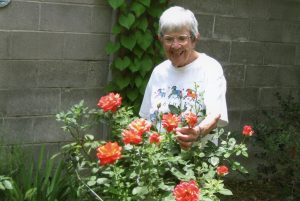 Carolyn enjoys the beauty of a flower garden. 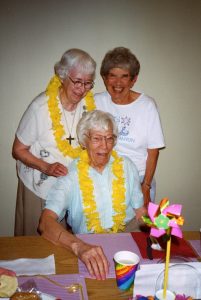 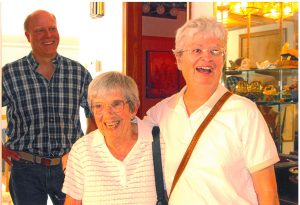 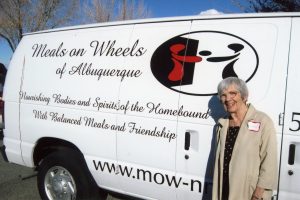 Carolyn with the Meals on Wheels van 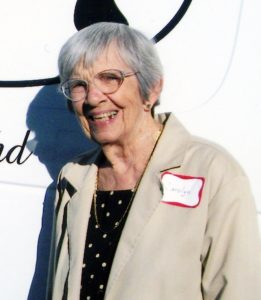