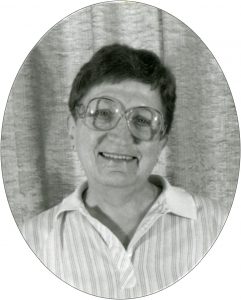 Sister Lee Connolly was named Mary Leona by her parents, William and Mary Collopy Connolly, both natives of Chicago. She had one older sister, named Veronica Margaret but called Bon; Leona liked to be called Lee. The family lived in Chicago until Lee was in fifth grade. Then they became Californians, moving to Monrovia where Lee attended seventh and eighth grades at the Loretto grade school, Immaculate Conception. Lee loved the Sierra Madre Mountains and the stretches of orange groves she worked in as a teenager.

After two years at the public high school in Monrovia, Lee transferred to St. Andrew’s Catholic high school, traveling considerable distance to South Pasadena for the sake of getting a Catholic education. During her junior year at St. Andrew’s, Lee wrote to Loretto asking to enter the novitiate. Her pastor at Immaculate Conception wrote to Reverend Mother Edwarda, “Leona Connolly has been at all times most willing to work with the Sisters in giving catechetical instruction to the summer school classes and every other help within her ability has always been cheerfully and very efficiently rendered. In all her ways … she is the type of aspirant most desirable for the religious life.”

Originally planning to enter after high school, Lee was instead encouraged by Mother Edwarda to finish her high school education while in the Loretto novitiate. Lee traveled to Kentucky, joining the postulant class on Oct. 24 1942. She received the habit and the name Sister Michael Marie on Aug. 25, 1943. She received her high school diploma from Loretto High School, Louisville, Ky., at about the same time.

Sister Michael Marie made her first vows on Aug. 15, 1945, and her final vows in 1948. She was sent from the novitiate to teach at St. Vincent’s in Denver. Four years later she was assigned to Immaculate Conception School in Hawesville, Ky., then changed within two months to Edina, Mo., and back to Hawesville the next year. Through the 1950s, Sister Michael Marie was assigned to six elementary schools in six cities, a pattern which often indicated a Sister’s ability to adapt and fill in where needed. In 1961 Sister Michael Marie received her first long-term assignment, at Our Lady of Mt. Carmel, St. Louis, where she remained for seven years, moving in 1968 to a teaching position in one of St. Louis City’s public schools. About this time, Lee Connolly resumed use of her baptismal name.

In 1970, Lee began the career that would absorb her totally for the next 25 years. Making use of her master’s degree in psychology, she accepted a position with the Jewish Employment and Vocational Services (JEVS) in St. Louis, doing testing and rehabilitation with persons with mental illness. Lee was appointed assistant director and counseling supervisor at JEVS in 1976 and director of rehabilitation in 1981. In 1987 she became vice president of the agency, reorganized as Metro Employment and Rehabilitation Services.

Lee developed a particular concern about the isolation of her clients who were deaf or hearing impaired. In 1975 she began developing programming to meet their unique needs. To prepare herself, Lee went to the Speech and Hearing Center in St. Louis and attended courses at St. Louis Community College. She attended public events that were signed. And she asked her clients to teach her. She would sign something she did not understand. Her clients would sign the word “example” and then act out the answer to Lee’s question.

Little by little, Lee’s program became an award-winning success, earning her the Counselor of the Year Award in 1978 and an award for the program itself in 1985.

Lee told a newspaper columnist in 1991, “The deaf are more isolated than the blind. Their very living with hearing people isolates them, because communication is so difficult.” The columnist conclude “Sister Lee has a unique tolerance for others’ differences and even an enjoyment of them.”

Late in 1994, Lee wrote to President Maureen McCormick, “The time has finally come for me to retire from the work that I have loved for more than 25 years. Jan. 6, 1995, will be my last day. Fran (Frances Mary Myers) and I have also decided to move to Huntington Beach, Calif., to live with my sister, Bon, who has been quite depressed and very lonely since the deaths of her husband and son. … Her home is plenty big enough for us and we believe that we can put laughter back into her life and keep the sunshine in ours.”

Lee and Fran let go of the house they had shared on Whispering Oaks in St. Louis, relying on the experience of Helen Swain to guide them in disposing of furniture. Lee wrote to Mary Swain, “We have never done anything like this before, nor have I ever resigned from a job. … It is going to be a great adventure and might turn out to be a lot of fun.” For nine years Lee and Fran lived in Huntington Beach. Their home was a center of southern California hospitality for traveling Lorettos.

In 2004, Fran and Lee moved to Loretto Motherhouse, and soon Lee took a room in the Infirmary from which she continued to share her hospitable spirit and positive outlook with all visitors until her death on the feast of St. Joseph, 2016.

Lee once made the comment that she wanted to be around people in need and do what she could to be of help. She wrote in an autobiographical sketch, “My whole life has been outstanding. I’ve been up and down, I’ve had joys and sorrows, but I’ve always been happy, and am happy now.” 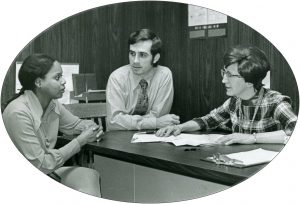 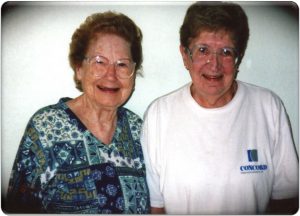 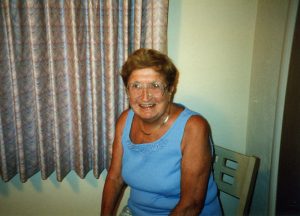 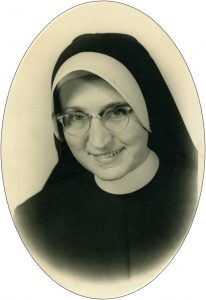