Remembrance of the Life of Sister M. Cecily Jones SL 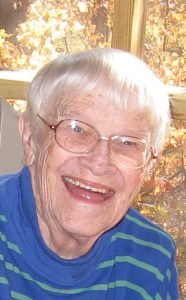 Sister Cecily Jones was born in East St. Louis, Ill., the only daughter of Harry Gilmore Jones of Belleville, Ill., and Alice Irene LaCroix of East St. Louis. Baptized Margaret Blanche, she was throughout her life called Peggy by her family and good friends. She was close to her two brothers and very proud of them in their adult years: Jack, two years older, who became an award-winning aviation writer for the Dayton Daily News, and whose wife and sons are with us this evening; and Bob, three years younger, whom she sometimes called Robin, who worked for federal agencies including the EPA.

Their childhood coincided with the years of the Great Depression. Peggy, her mother and brothers left their father working in East St. Louis and moved, for economy’s sake, to their grandmother’s small farm near Cuba, Mo., a rural area southwest of St. Louis. For a half-dozen of Peggy’s most formative years, her daily life revolved around the growing and preserving of food, pumping water from a well and exploring the woods and fields. Throughout her adulthood Cecily drew on experiences and events from those years as the springboard for her poetry and essays. Her writing expressed not only her childhood delight in that rural world but the spiritual grounding she found on her grandmother’s farm. In 2011 Cecily wrote an autobiographical essay in which she explored the sustaining sense of home, connection and abiding Presence which took root in her during her childhood:

“Sometimes I think my connection with God grew more from silence than from words. When I remember my childhood, I recall nothing being said at home about God or about prayers or anything ‘religious.’ We were not one of those families that ‘prayed together and stayed together,’ though we did stay! Perhaps this lack was because my mother was very reluctant about bringing up religion to my non-practicing Presbyterian father who [nevertheless] had made those promises about raising the children Catholic. And Catholic indeed we were raised, but essentially by the [Notre Dame] sisters at school rather than by any spiritual practices at home.

“My mother believed so much in wanting us to be brought up religiously that she drove us daily, on rutted, iced-over, scrabbly roads, eight miles each way, fording a creek en route, to get to the Catholic school in our town. There I learned about God from memorizing the catechism. But I think that on our farm I sensed something of a relationship with God. I was at home there, somehow connected with some presence, even though as a child I was unconscious of nature’s effect on my soul.”

Peggy’s family returned to East St. Louis in time for her to attend high school and junior college with the School Sisters of Notre Dame. We have her own account of meeting the Sisters of Loretto, written in 2007 in a letter to a young friend:

“Having been educated by the SSNDs, first grade through junior college, I then finished college at Webster in St. Louis, where I met the SLs. After graduation [in 1945], I was offered a teaching fellowship, [meaning] in exchange for teaching three sections of freshman English at Webster, I worked on my MA in English at St. Louis University. During that year, I gradually decided that I really liked being with and working with these sisters; I liked their friendliness; I liked the way I sometimes observed them interacting with and teasing one another; I liked their senses of humor and their ‘humanness.’ Finally I figured I’d like to join this group (no earthshaking ‘call’ from God, not even a feeling of anything especially ‘holy’ about it). I just felt that I might find a fulfilling life with these women with whom I felt so much at home.”

Peggy arrived at Loretto in June 1946, and received the habit and the name Sister Mary Cecily on Dec. 8, 1946; two years later she made her first profession. Cecily’s account of her Loretto life after the novitiate continues in her own words:

“[After] a semester of teaching in Mobile, I was back at Webster, where I would remain for the next 12 years, teaching English and, for the last six of the years, being dean of students. Besides teaching, I, with several others, went to St. Louis U. for late afternoon and Saturday classes, completing my MA [in 1953]. In the community, I roomed, on the fourth floor of the Ad Building, with two other sisters, both around my age in the order; later, I would move over to living in the girls’ dorm, with its attendant duties. We were extremely busy. In addition to the professional part of our lives, we each had several chores — ‘offices’ in Loretto lingo — cleaning the chapel or other areas; serving table several times a week; pitching in on Saturday afternoons with kitchen duties, such as preparing grapefruit for Sunday breakfast; staffing the guest dining room; taking a weekend shift at the switchboard, etc. Each large Loretto house, Webster among them, included several older, infirm sisters in the community. We younger ones helped care for them, carrying their trays, assisting them with getting ready for the day, wheeling their chairs to the choir loft for Mass, etc. It was all just a part of life for us.

“I think what bound us together and what bound me to the community was in large part the work, in those early years the work of education. At the same time, other aspects of community life still remain the dearest memories for me — of strong, courageous women, women who cared for those of us who were younger, women who could enjoy one another’s company. It is perhaps those memories which have also kept me bound to Loretto.

“After Webster, I spent two years studying theology and scripture at Marquette, a most exciting and opening-up period for me — 1961-63, just at the start of Vatican II. At holidays and in the summer, I could come to the Motherhouse where Luke had a way of getting those of us who were away studying to share our learnings with her and others. I used to send her typed copies of my notes, especially from Bernard Cookes’ classes. Then for me came several hard years because I was assigned to formation work, which I did not find a happy fit. But all the while, the changes in religious life were brewing, and in so many ways it was an exhilarating time — a time when we in Loretto were being introduced to new ideas, new theology, new ways of living, new freedoms, new patterns of community, a new maturity.

“The years beginning with August 1970 — when our national offices moved to Denver, and when I began living in a small community of six (later five) — were the happiest and most community-aware period of my life. On our newly set-up staff, led by Helen Sanders who was carrying out the renewal changes which had evolved during Luke’s leadership, I had a job writing Loretto publications. Living with Luke, who at the end of her presidency was free to move into almost full-time justice/peace work, was the privileged opening for my own involvement in peace and justice endeavors, which from then on became the central focus of my life. I loved my staff job so much that I used to tell folks that I never felt I was going to work. I was involved in creating community in a new way — trying to integrate, in the pages of INTERCHANGE, the newsletter I had initiated, the mission and the community of Loretto. At the same time, I became involved with the United Farm Workers, with protesting the Vietnam War, and then on to nuclear issues, the nuclear freeze, justice for janitors and other workers, gay rights, protesting the Gulf War, working for Middle East peace, and on and on (with an occasional protest of church policy). I also became an activist in Democratic politics and worked as a campaign staff member for Denver’s legendary Congresswoman Pat Schroeder.

“I experienced a warm community life, a life in which our community and our mission of working for justice and acting for peace were marvelously integrated. We had lots of happy times at our house; we gave lots of parties; had lots of people over; established some cherished traditions for our little community; and went through whatever hard times came with a sense of loyalty and love. Our interactions with the Denver Loretto community and wider circles of friends enriched all of us. I felt that my life was whole.”

As the youngest in her house of “elders,” Cecily experienced their gradual aging and supported each one’s transition to Loretto Motherhouse. Eventually, in 2003 Cecily herself moved to Loretto, a move which she described for Anndavid Naeger’s Our Days:

“In the fine October weather during my first few weeks [at the Motherhouse], I often took Mary Luke for wheelchair rides around the grounds. On these strolls, Luke frequently exclaimed over the trees, their splendid scarves of all colors, of course, by more especially, their sheltering heights. For me the trees have become twofold symbols. Sturdy, deep-rooted, reaching down to the depths of Loretto soil, they represent the strength of this place, St. Stephen’s Farm, where my fore sisters have lived since 1824. Steady, embracing, apparently reaching out, sharing their beauty in fullness and in starkness, they represent the welcoming spirit so very tangible at the Motherhouse. While I cannot deny that I miss many aspects of my long stay in Denver, yet I love this rural atmosphere, too. Reflecting on our trees, I am grateful for having returned to this special place where Loretto life has been nurtured for so many generations, and especially grateful to all those, community members and staff workers, who have been so welcoming to me these [years] of my being home.

“…For me Loretto has been a beloved home. My own commitment in Loretto has been the source of the full and meaningful life I have known. In ways difficult to articulate, I have come to know something of the Light who is God for me.”

Cecily as a baby 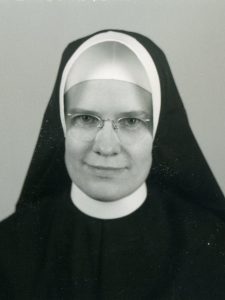 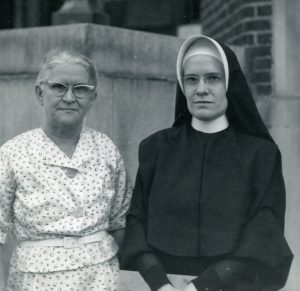 Cecily and her mother 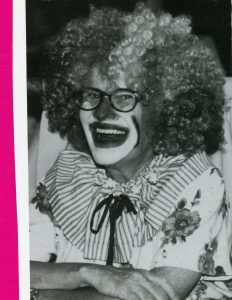 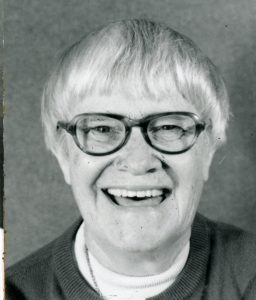 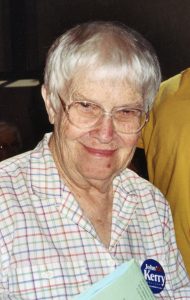 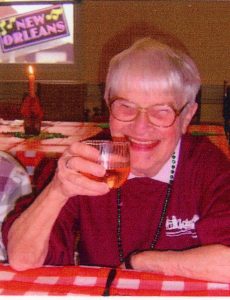 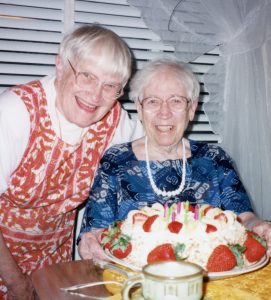 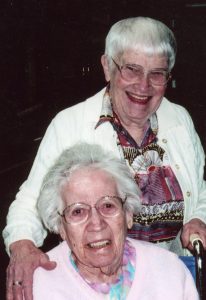 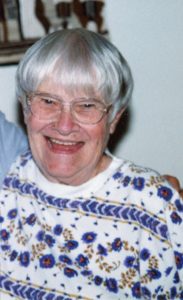 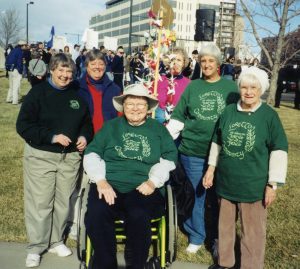 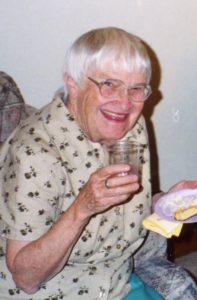 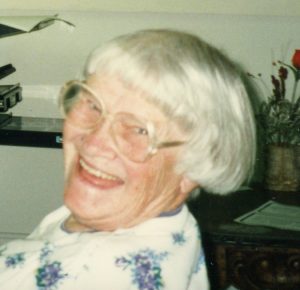 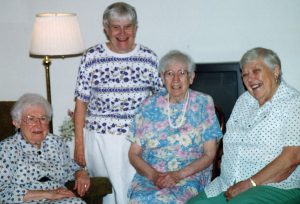 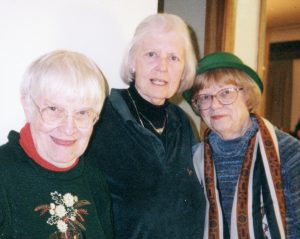 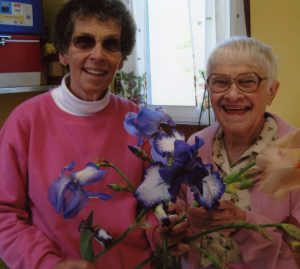 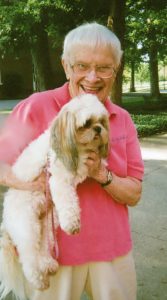 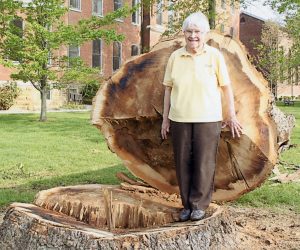 Cecily at the Motherhouse 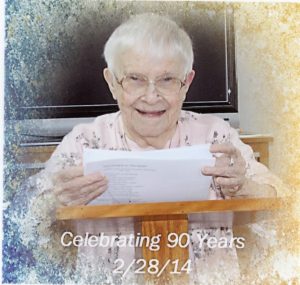 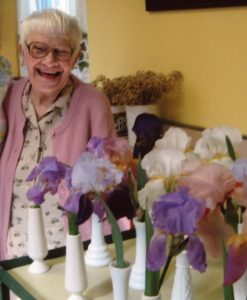 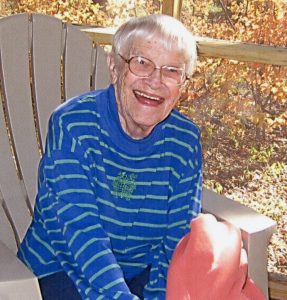