Remembrance of the Life of Sister M. Bernardine Wiseman SL 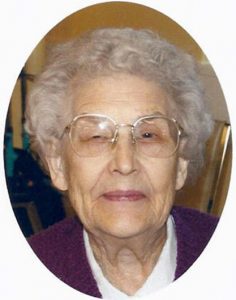 Sister Bernardine was born in Hodgenville, Ky., the third of seven children of Charles Bernard Wiseman of Rineyville, and Christine Margaret McMillen Wiseman of Tunnel Hill, both in Hardin County, Ky. According to Bernardine’s birth certificate, Bernard Wiseman was at that time farming in La Rue County, but soon the family moved to a farm near Elizabethtown in Hardin County.

Six weeks after her birth Bernardine was baptized at Loretto’s Bethlehem Academy, St. John, Ky., where her aunt, Sister Josepha Wiseman, was missioned. The baby was given the name of her paternal grandmother, Sarah Isabell, and was known as Issie.  Little Issie began grade school with the Loretto Sisters at St. James parochial school in Elizabethtown.  The family moved again, to a farm near Henryville, Ind., where Issie completed grades 2-9 in the local public school.  For her final three years of high school, Isabell attended Bethlehem Academy, as a boarding student. Even before graduating, she asked to join the Sisters of Loretto, joining also her older sister Mary, who had just received the habit and the name Sister Theresa Louise Wiseman.

Isabell entered Loretto on June 7, 1942; she received the habit on Dec. 8 that same year.  She took her father’s name as the religious name by which she would live for nearly 74 years, Sister Mary Bernardine Wiseman. Following the novitiate, and her first vows on Dec.  8, 1944, Bernardine was sent to Webster College where her mission was the Sisters’ refectory and other services for the local community.

Bernardine herself takes up the account, in a short autobiography she wrote in 1976:  “After being at Webster College for several years, I went to Bethlehem Academy (1952).  It was a boarding school.  I served as Mother, nurse and teacher to the little children.  After about six years I took up my new mission at Immaculate Conception, Hawesville, Ky.  It was a poor parish but I liked it very much.  Each spring we would pack our trunks to leave for summer school.  To my surprise one summer (1961) I did not return. Our convent had been exchanged for a convent outside St. Louis, in Jefferson County; that was Good Shepherd in Hillsboro, Mo. Then, in 1965 my assignment was to go to Ascension School, Chesterfield, Mo.”  An article in the May 1993 issue of the Ascension School newsletter continues Bernardine’s story:  “Sister Bernardine has served Ascension School for 28 years (1965-1993).  She began her career at Ascension as a first and second grade teacher. During difficult financial times and the threat of closing the school, Sister ‘volunteered’ her services to act as principal until financial stability could be restored.  For the past 10 years, 1983-93, Sister Bernardine has been busy working in the offices of the school and the parish. Just ask any teacher at Ascension how much they depend on Sister Bernardine.”

Seventeen of her years at Ascension in Chesterfield Bernardine shared with her sister, Sister Theresa Louise.  Six of those years their good friends and colleagues Sisters Joyce Reasoner and Charles Maureen Walker joined them in the school.  At some point the school acquired a “poodle in residence” named Buffy. When in 1993 Bernardine and Theresa Louise retired to Loretto Motherhouse, Buffy accompanied them to the home of their sister, Doris Wiseman, in Louisville.

The Loretto directory says that Bernardine devoted herself to “prayer and community service” at the Motherhouse for more than 20 years. She and her sister drove residents to innumerable medical appointments and made themselves as indispensable as they had been at Ascension School. They maintained their close friendships and made new friends.  In recent years Bernardine and Theresa Louise made daily trips to the barn to nurture, protect, and enjoy the cats and kittens.  They also amazed us all with their skill in completing jigsaw puzzles with thousands of pieces.

Sister Bernardine was a quiet woman, consistent, practical, faithful in both her daily chores and in her daily prayer.  Loretto has many reasons to be grateful for Bernardine’s 74 years of steady dedicated service, and most especially for the many hours Bernardine spent in quiet prayer in the Blessed Sacrament chapel. We echo her aunt Sister Josepha as we say farewell to this “Grand little Sister of Loretto.” 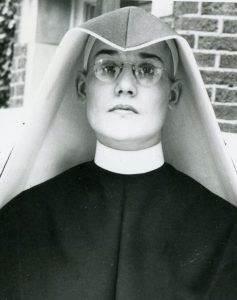 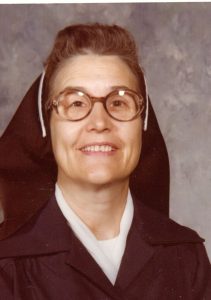 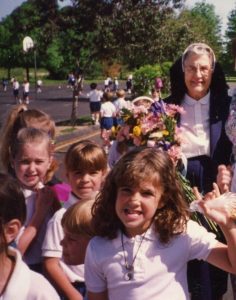 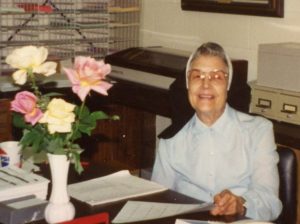 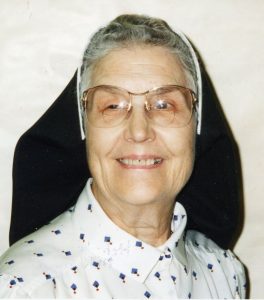 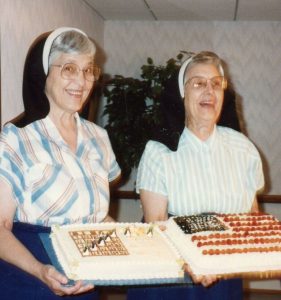 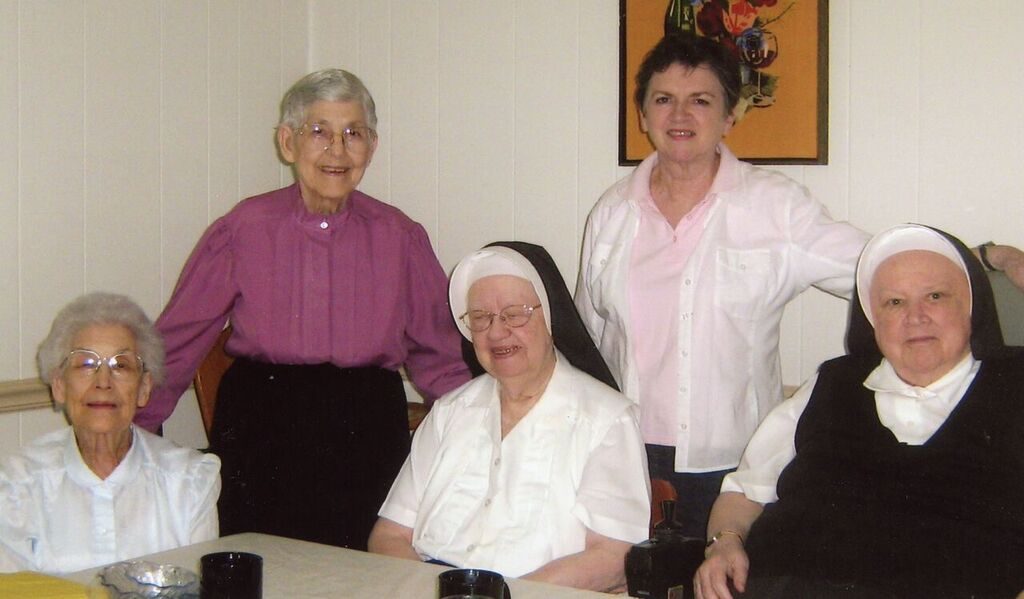 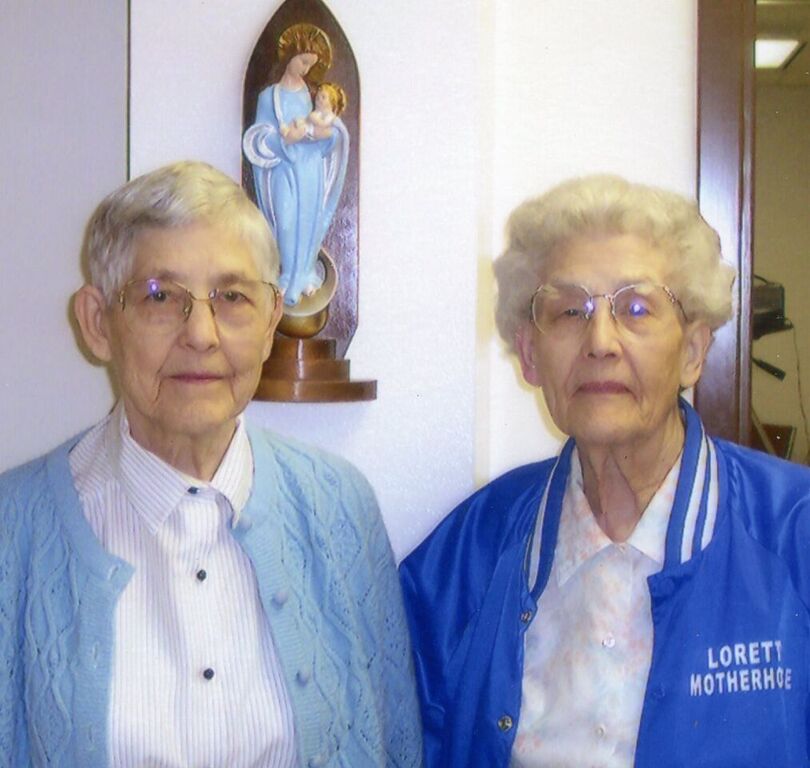 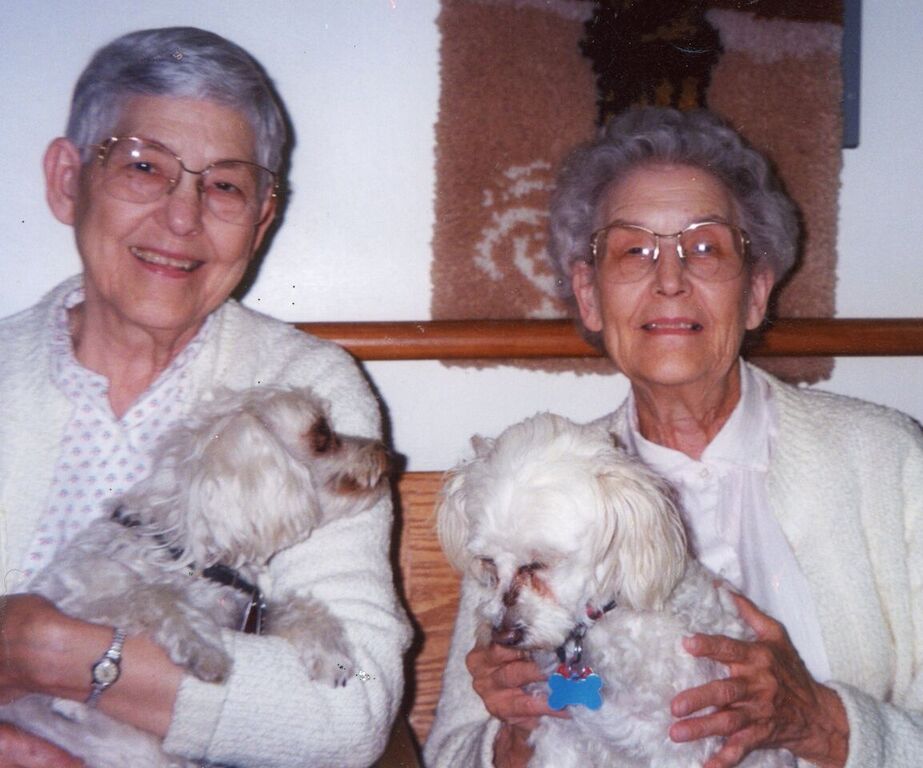